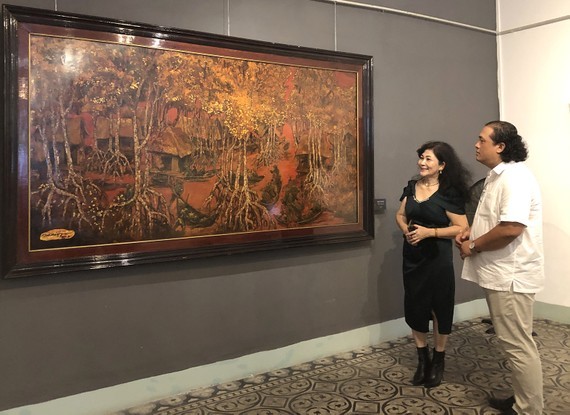 HCMC Fine Arts Museum organizes an exhibition marks its 35th founding anniversary.
The display presents to viewers a total of 152 exhibits, including 49 ancient artworks; six sculptures made of pottery, bronze and wood; 73 watercolor, oil and lacquer paintings; 24 sketches and drafts created from 1939-2021.

The exhibits are artworks of famous veteran artists, such as Le Thi Kim Bach, Luu Cong Nhan, Le Ba Dang, Truong Han Minh, and young artists, namely Mac Hoang Thuong, Bui Duy Khanh, Lam Chi Trung and others.
Of these artists, painter Luu Cong Nhan is one of the big names in the world of Vietnamese fine arts. He passed away in Da Lat city at the age of 76 in 2007. He left behind thousands of artworks, including watercolor, oil and do paper examples amongst many others. He was especially famous for his collections depicting Da Lat Villas, Ha Noi and Hoi An ancient streets, some of which had ever been on display in both local and foreign museums. His works during the two national resistance wars were considered examples of ‘socialist realism’ such examples include, Gai Que (Country Girl), O Du Kich Nho (Small-bodied Guerilla Female Fighter), Mot Buoi Cay (A Day on the Field) and Binh Dan Hoc Vu (People Learning).
In addition, Chinese-Vietnamese painter Truong Han Minh was recognized for having the most watercolor paintings which were auctioned for charity by the Asia Record Organization in 2013. The painter is a master in traditional Chinese watercolor paintings in Vietnam with 60 years of experience in watercolor painting. He was awarded the Third-class Labor Medal of Vietnam President for his outstanding contribution to the ethnic minority communities, especially poor Chinese people in 2018. Truong Han Minh is also Chairperson of the Chinese Fine Arts Association and a member of the Vietnamese Fine Arts Association. He has taught at many Art schools in the City.
The event will run until October 2.