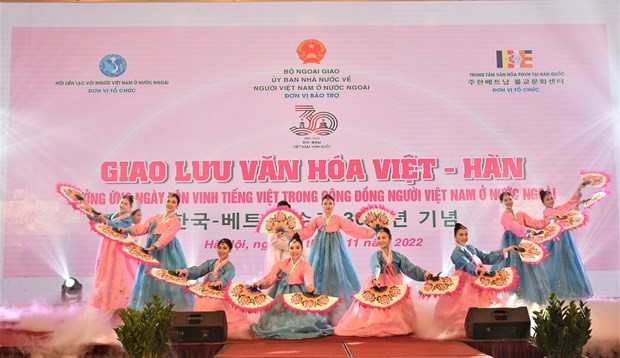 An art performance at the event (Photo: dangcongsan.vn)
The event was part of the activities to celebrate the 30th founding anniversary of the Vietnam –RoK diplomatic ties (December 22, 1992-2022) and in response to the "Day for honouring Vietnamese language in Vietnamese communities abroad”.
Addressing the event, former Deputy Minister of Foreign Affairs Nguyen Phu Binh, who is also chairman of the Association for Liaison with Overseas Vietnamese, appreciated efforts by the centre in supporting overseas Vietnamese in the RoK, and its positive contributions to promoting the close relations between the two peoples through the activities to popularise and preserve the Vietnamese culture and language.
According to SCOV Deputy head Mai Phan Dung, there are 200,000 OVs living, working and studying in the RoK. The increasing number of the Vietnamese-Korean multicultural families, along with the growing trade ties between the two countries in recent years, has helped the bilateral diplomatic relations become closer.
Vietnamese Buddhist nun Thich Nu Gioi Tanh, director of the Vietnamese Buddhist Cultural Centre, said Buddhists and members of the centre have made great efforts to cultivate friendship and promote culture exchange between Vietnam and the RoK, thus strengthening trust and mutual understanding among their peoples.
In the framework of the programme, a wide range of activities were organised, including a talk show on the Vietnamese and Korean cultures, a fashion show featuring Vietnamese and RoK traditional costumes, and a ceremony to honour organisations and individuals who have made meaningful contributions to the community and society.
The event has contributed to promoting the cultural, economic and political development of the two countries, and tightening the bilateral relations.