The event is one of the series of activities honoring the life and career of Chu Van An and his contribution to the country’s education sector which is co-organized by the Hanoi People’s Committee, relevant agencies in coordination with the Vietnam National Commission for UNESCO.

Speaking at the event, Chairman of the Hanoi People’s Committee, Chu Ngoc Anh stressed that educator Chu Van An is a typical example presenting the the studious tradition of the Vietnamese people. His prestige, talent and virtue have inspired and taught next generations.
Educator Chu Van An is the fourth Vietnamese to be honored by UNESCO after Nguyen Trai, a Confucian scholar, poet, politician; President Ho Chi Minh and great poet Nguyen Du.
The UNESCO recognition affirms the international community’s high appreciation for Vietnamese educational and cultural values; contributes to the promotion UNESCO’s rightsbased approach to “the inclusive and equitable quality education and promote lifelong learning opportunities for all”, he added.
Teacher Chu Van An was born in 1292 in Thanh Tri District of Hanoi. He was well-known as "straightforward, clean, truthful, and not bothered about benefits"people.
He is widely considered one of Vietnam’s most respected educators, who devoted his life to the humanistic education philosophy, regardless of rich or poor. Many his students were people who had outstanding contribution to the national construction and defence.
Under the reign of King Tran Minh Tong (1314 - 1329), he was appointed as head of Quoc Tu Giam or the Temple of Literature, in Hanoi, Vietnam’s first university.
Under the reign of King Tran Du Tong, teacher Chu Van An suggested the King slash seven sycophantic courtiers who exceeded their authority. But it was unsuccessful. He resigned as mandarin and came to Chi Linh mountain in Hai Duong Province to continue to teach students.
In 1370, he passed away and worshiped at Van Mieu Quoc Tu Giam (Temple of Literature) in Hanoi. 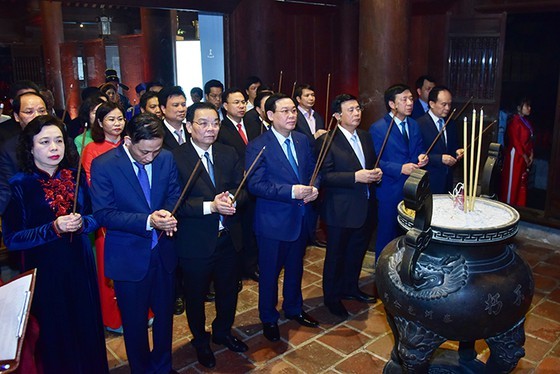 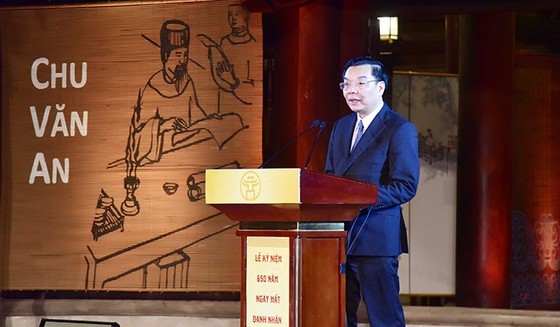 Chairman of the Hanoi People’s Committee, Chu Ngoc Anh  speaks at the event.