The local authorities affirmed its decision at the discussion on solutions for strengthening the effective management of Do Son Buffalo Fighting Festival that was held in Hanoi on September 7 by the Ministry of Culture, Sport and Tourism.

The tranquilizer gun and assistant tools have a role in wildlife conservation and animal control, experts said.
Participants in the meeting also asked the city government to correct the management and organization tasks to ensure a safe festival.
In July, the People’s Committee of Hai Phong city launched a decision to temporarily halt Do Son Buffalo Fighting Festival for investigation of the use of stimulant therapy in buffaloes after the accident. Accordingly, the buffalo No. 18 killed his master by goring in the festival on July 1, The buffalo’s owner is Dinh Xuan Huong, 47, a resident of Do Son’s Van Huong Ward.
Do Son Buffalo Fighting Festival is a unique and traditional festival in Do Son District, Hai Phong city. This festival is officially held on the 9th of the 8th lunar month for prosperity and happiness to local people from the 18th century. 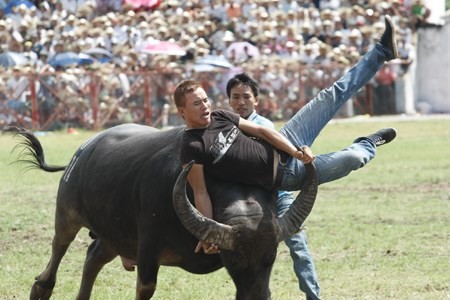 
By MAI AN – Translated by Kim Khanh