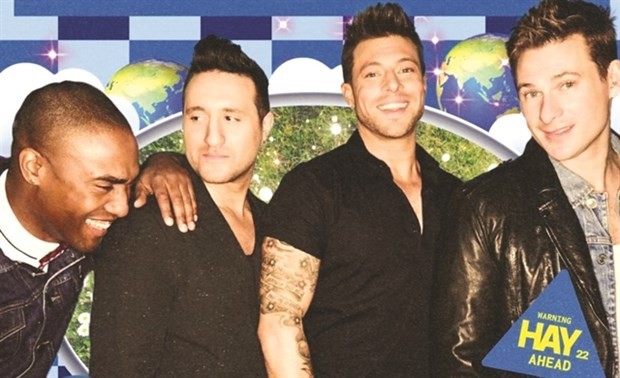 English boy band Blue on a poster for 'HAY Glamping Music Festival'. (Photo courtesy of The BROS Entertainment)
Following the announcement of the event, Blue posted on Instagram: “Two years ago we almost made it to Vietnam but the pandemic got in the way. That changes next month as we roll into Hanoi for the Hayfest on Saturday 6 August 2022.”
Hoang Linh, founder of The BROS Entertainment, the event's organizer, said that the four groups will perform a series of hits that were once adored by many Vietnamese fans.
"They will take us all back to our youthful years full of energy and enthusiasm, exactly as this year's music festival's theme is 'Brilliant Youth'," he said.
The organizers had also intended to invite Westlife and the Backstreet Boys, but because they were unable to arrange a schedule to perform, this year's HAY Glamping Music Festival included only four foreign bands.
However, Linh revealed that the event will be held yearly and that other well-known artists would visit Vietnam in the future.
"For us, a great music festival is not only about selling out all the tickets or obtaining a standing ovation. It's also about the incredible experience that performers have on stage in front of thousands of people. We intend to host multi-day festivals in the future so that this event becomes a destination for art, entertainment, and experiences for friends, families, and international travelers," he said.
Young Vietnamese artists including Ngot, Chillies, Da LAB, Trong Hieu, and Hoang Dung will be part of the HAY Glamping Music Festival's line-up.
During the press briefing held on July 28, the organizer also unveiled The Moffatts' tourism-promoting music video project.
At an effort to enhance Vietnam’s image, the group will film four music videos at four of the country's most spectacular tourist destinations.
The Moffatts expressed their joy upon their return to Vietnam following the project's announcement.
"Vietnam is a beautiful country. We have performed here before and had wonderful experiences. With this initiative, however, we hope to experience Vietnam in a slower, deeper way. Through our experience with HAY Festival, we will become tourists who promote the beauty of this place," they said.
HAY Glamping Music Festival will take place at Hanoi’s Yen So Park on August 6.