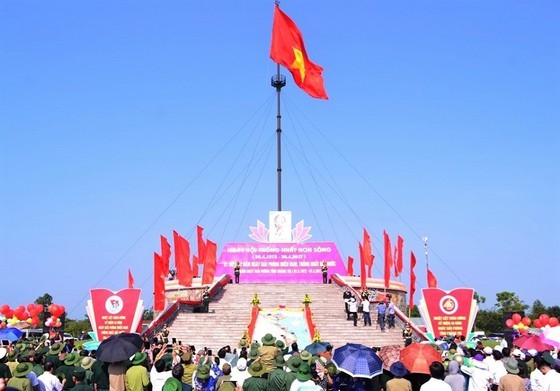 A festival is organized in the country (Photo: SGGP)
Existing problems such as commercializing festivals in the event organization is a dilemma.

Therefore, the project is hoped to build a general image of Vietnam’s festivals and contribute to developing festivals’ values.
When the socio-economy has developed more, organizing festivals is not only a form of preserving traditional cultural values but also meeting the needs of sightseeing and tourism, helping service businesses promote their products and sign contracts to promote production and consumption.
However, some individuals have earned profits; thus, many festivals have gradually moved away from the traditional meaning of these cultures.
How to prevent the festival from such above-mentioned problems and promote traditional folklore values is always a big problem. According to Nguyen Quoc Huy, an expert  from the Ministry of Culture, Sports and Tourism’s sub-department of culture, despite the large number and diverse types, Vietnam has not applied information technology or had digitization projects; hence, it is difficult to manage and collect data. This project, with the application of 4.0 technology in collecting basic information, reviewing and evaluating the actual situation of the festival, is considered the largest "festival inventory" ever.
As scheduled, the project will be implemented in five years. It is divided into two phases. The first phase during 2021- 2022, concentrates on collecting statistics from festivals, building a database on festivals and management software, and the launch of the Vietnamese festival portal.
The digitalization and building of a database for cultural festivals and other types of festivals including those originating from foreign countries as well as an accomplishment of the portal will be carried out in the second phase. Human training for the operation and maintenance of the portal will be carried out in this phase, too.

By Mai An - Translated by Anh Quan