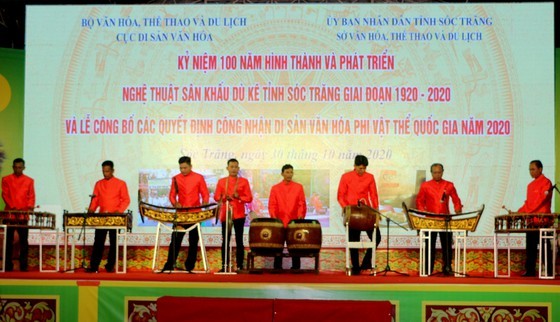 Young Khmer men perform Ngu am
The five-tone music is a popular and long-standing traditional musical genre of the Khmer in the Southern region in general and in Soc Trang in particular.
Through the process of formation, existence and development, the performance folk art form has been imbued with special values and meanings.
Today, despite many changes, the vitality of the musical genre is still preserved and developed.
This genre of music is influenced by the royal court and religion of India as well as some countries in Southeast Asia such as Cambodia and Thailand but still reflects the unique characteristics of the Khmer group in general and those in Soc Trang in particular.
The 5-tone musical ensemble is an orchestra composed of five tones of musical instruments made from five different materials, which creates five distinct timbres.
Each Pinn Peat orchestra consists of nine or ten instruments, mainly wind, string, and percussions including several varieties of xylophones, drums, cymbals, gongs, and fiddles namely Srolai Pinn Peat, Roneat Ek, Roneat Thung, Roneat Dek, Kuong Vong Toch, Kuong Vong Thum, and Chhung, Sampho, and Sko Thum.
There are similarities in the orchestra’s structures of Khmer people in Soc Trang and the Khmer in other localities, as well as the Pinn Peat orchestra of the Khmer in Cambodia, the Sebnai orchestra of Laos, the Piphat orchestra of Thailand, the Saing Waing (Patwaing) orchestra of Myanmar, and the Gamelan orchestra of Malaysia.
The Pinn Peat orchestra expresses the feelings and attitudes of the Khmer towards genies, nature, and other people. Almost every Khmer pagoda has a musical ensemble. In the past, the ensembles only performed in pagodas. Now they play at festivals and parties.
An orchestra must have roneat – xylophones, which are considered the lead high-pitched instrument in the ensemble – and Skor-thom - two big drums played with drumsticks. There are also flutes, fiddles, and cymbals. To play in the ensemble, the musicians must have a deep understanding of the Khmer music, tradition, and culture.
The folk art genre has become a cultural identity closely linked and deeply imprinted in the consciousness and daily life of the Khmer people.
When the sound of Sko Voth drum along with the five-tone musical ensemble resounds at Khmer pagodas, the people in hamlets know that it is time to hold religious ceremonies in their localities.
The Pinn Peat orchestra was recognised as a national intangible cultural heritage in December 2019 by the Ministry of Culture, Sports and Tourism.
Authorities and relevant agencies, and the Khmer community in Soc Trang have taken many specific actions and made great efforts to preserve and promote the unique culture value of this traditional musical genre.
Many Khmer pagodas have musical clubs and classes for children. They aim to inspire the children to learn the Khmer music as a way to preserve it.
Currently, the performing art of the musical genre is no longer limited in pagodas, at religious ceremonies, or at funerals. The musical genre has been performed and taught at the province’s Khmer art troupes, most junior high schools and boarding high schools for ethnic minorities in the province.
In an effort to preserve the five-tone musical ensemble, local authorities have also organised competitions to find talents, thus encouraging learning and playing the musical genre.