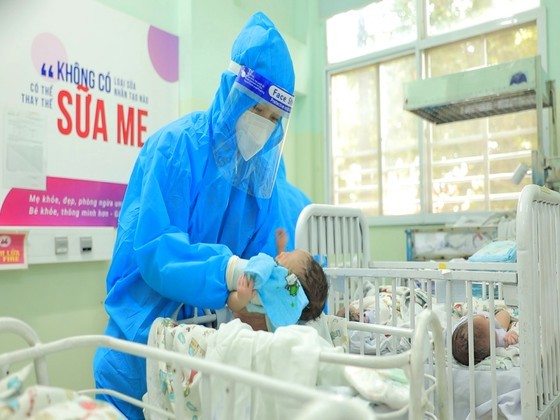 Audiences were deeply touched at watching the two documentaries Ranh Gioi (Boundary ) and Ngay Con Chao Doi (the Day when a child was born) of director Ta Quynh Tu which were broadcast in the special VTV program in September. Later, three episodes of the HTV series from the center of the epidemic of reporter Le Truong Giang including Da Chien (Field Hospital ), Ngay Ve (Day of Reunion) and Hau Phuong (Behind the Scenes) about doctors and patients’ struggle against Covid-19 received good response from viewers.
According to Director Ta Quynh Tu, the biggest success of the two films 'Boundary' and 'the Day when a Child was born' is to give viewers a comprehensive and honest view of the harshness of the Covid-19 pandemic. The film crew has received viewers’ positive feedbacks. Audiences said that they have learnt many lessons from the film including their better awareness of disease prevention and appreciate the life they have. Director Nguyen Hoang, who has worked for many years at Ho Chi Minh City Television Film Studio (TFS), also highly valued the two films for their authenticity, giving viewers a lot of information about the dangers of the pandemic. He emphasized: "The film helps viewers raise their awareness of protection for themselves and the community".
According to reporter Le Truong Giang, his journey to field hospitals aimed to bring about the hope of love to audiences and trust of medical ethics in the days when the Covid-19 epidemic threatens every home. In particular, viewers can feel big-hearted doctors who not only treat but also use their feelings and conscience to return patients to their families.
Regardless of the possibility of contracting the fatal virus, many film crews stayed in hospitals to record real picture and clips of the fight against Covid-19 in medical facilities. Documentaries about the battle against Covid-19 in treatment facilities that have been produced are comprised of Chuyen o Thanh Pho Thuc (Story in the waking city), Tro ve Cuoc Song – Cuoc Chien sinh tu cua cac F0 (Back to life – Covid patients’ life-or-death battle), Cung nhau Vuot qua Dai Dich (Overcoming the pandemic together), Lua chon cua toi (My Choice), Niem tin Vung buoc (Unwavering faith), Tang thu 3 (The 3rd Floor). The film 'The War Without Limits'  was expected to be released in theaters but it was delayed because of the reoccurrence of the epidemic. It has been licensed by the National Film Board and the Cinema Department.
Director Nguyen Hoang always remember the words of a famous American documentary director in a discussion about the meaning and the importance of documentaries that, “A country without documentaries is like a family without a photo album.” He said that documentaries are always needed because the nature of this genre is honesty, real people, and real things. According to director Quynh Tu, the documentary is associated with the country's history from the beginning of cinema; so, people hardly refute its vitality. However, most filmmakers agreed that documentaries are a picky genre and there aren't many films that are attractive enough to hold audiences back.
Mr. Giang said that three factors that determine the success of a documentary are the truth is presented in an attractive, unexpected and profound way. According to his point of view, truth in documentaries is a popular factor, helping documentaries still have a lot of living land compared to other types of journalism. From real people, moviegoers will feel that the characters are very close and sometimes also have their own silhouettes.
The good thing is that television stations have paid more attention to making documentaries with diverse topics by dynamic crew in recent years. Happily, many documentaries have been released in theaters like Mau Co ua (Withered grass) , Chuyen Di Cuoi Cung cua Chi Phung (Phung's last trip), Lua Thien Nhan (Fire of kind heart), Di tim Phong ( A journey to find Phong), Buc Tuong – Chuyen cua Ngay Hom Qua (The Wall - Yesterday's story).