After his successful runway debut at NYFW that took place in February with his autumn/winter 2019 collection themed “A walk of stars”, Tri will present his spring/summer 2019 collection featuring latest 60 designs in this event.

The collection will be performed at 1 p.m. on September 9 at Spring Studio which has been home to leading designers like Ralph Lauren, Marc Jacob, The Row, Oscar De La Renta, Tom Ford and Calvin Klein.
Nguyen Cong Tri is one of the Vietnamese leading designers. He is the first Vietnamese designer who became a member of Asian Couture Federation (ACF). Tri has been participated in many international fashion weeks, such as Tokyo Fashion Week Fall/ Winter in 2016 and 2017. He has been invited to participate in international fashion shows, such as Tokyo Fashion Week Fall/ Winter 2017.
R&B star Beyoncé wore a gown by Vietnamese designer Công Trí at the premiere of Disney’s The Lion King in London on July 14.
She joined a selection of world famous celebrities who have chosen to use Cong Tri’s creations, like Katy Perry, Rihana, actresses Kate Bosworth, Katherine McNamar and British pop star Rita Ora. 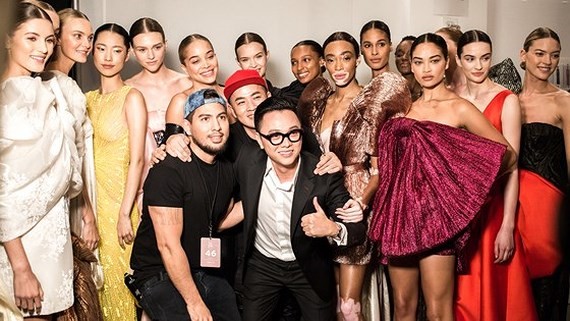