The Cougar Queen V - the Royal Life hit domestic theaters on March 12 and continuously kept the top second position at the box office for many weeks. Up to now, according to Box Office Vietnam, the film has earned more than VND55 billion at the box office. 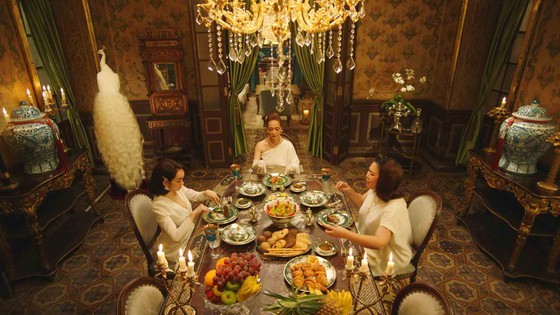 A scene in the film
Right from the beginning of the project, MAR6 Pictures producer has had a strategy to promote distribute the film international through major VOD (movie-on-demand) platforms, namely Netflix.
Director-producer Namcito said that with the desire to bring the film to an audience in the world, he has collaborated with the international distribution agency Skyline Media to search for suitable platforms. After successfully convincing through First Look (trailer), the film will be officially released in 190 countries and territories around the world soon.
The Cougar Queen V is one of the film projects invested on a large scale with a budget of up to US$2 million and gathered a professional production team. The film has the participation of famous actors from the North and South such as People's Artist Le Khanh, People's Artist Hong Van, People's Artist Hoang Dung, and young actors including Kaity Nguyen, Khuong Le, and Anh Dung.