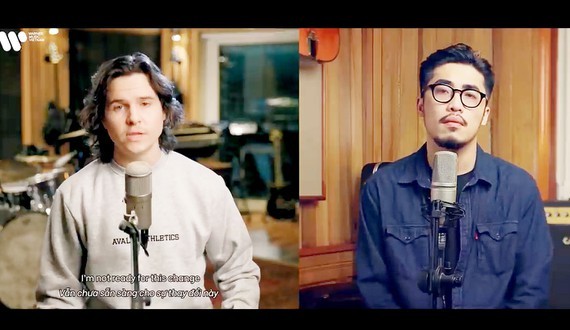 Lukas Forchhammer and indie singer Thai Vu in  their new MV
One day, rapper Tyga sent an Instagram message to rapper Phao (real name Nguyen Dieu Huyen) insisting to jointly make a song. Not long after, the 18-year-old Vietnamese rapper and Tyga launched the "Two Minutes More" remake at the end of July, marking the first international production of Phao.

Rapper Tyga owning the billion-hit hit Taste was nominated for a 2011 Grammy Award and he has so far released five studio albums. Many artists want to collaborate with him. With the help of Warner Music Vietnam and Spinnin' Records, Columbia Records - the audio version of the song - was released on popular online music platforms.
In early July, 26-year-old indie singer Thai Vu launched a new product named Happy for you in collaboration with a Danish billion-listed singer, Lukas Forchhammer, a member of Lukas Graham's band. Famous for his talent from 2016, Lukas has had 1.1 billion views on his YouTube and was nominated for Record of the Year at the 2017 Grammys. After a collaboration appointment, Vu and Lukas worked together for four months.
Due to the impact of the Covid-19 epidemic, the two artists performed a duet by recording and recording from a distance. In Happy for you, Vu wrote part of the lyrics in Vietnamese with an empathetic perspective with the original author. When the song was released, many foreign audiences expressed their excitement. Lukas said on his Instagram that he was excited to collaborate with Vu hoping that they will perform live together with audiences’ support.
Recently, the Vietnamese music market has also welcomed many songs sung by Vietnamese and Korean artists such as Doi Ta (singer Jang Mi and rapper Jung Min Hyuk); Downtown Baby (singer Lyly, rapper R.Tee of Vietnam combined with rapper Bloo). The collaboration between Son Tung M-TP and world rap and hip-hop legend Snoop Dogg in the MV Give it to me is the most special event.
năng”.
Talking about these collaborations, musician Duong Khac Linh said they are not naturally inspired to collaborate but they must meet certain standards, which are attractive and suitable for them. This has shown a good sign for Vietnamese music as more people will learn Vietnamese music more. These collaborations are becoming a "win-win" option. Young artists have many opportunities to learn when collaborating with professional crews, and international artists have access to Vietnamese fans - a rather potential music market.
The collaboration between Son Tung M-TP and rapper Snoop Dogg has helped to bring the MV Give me to have nearly 240 million views on YouTube meanwhile Vu and Lukas are highly appreciated by international audiences. However, Jang Mi and Jung Min Hyuk's MV "Two We" from the end of June until now has just achieved over 1,600 views while Downtown Baby MV has just had over 674,000 views. Not to mention, some MVs have earned mixed reviews from the audience that the music and images were not as impressive as expected.
Collaboration between domestic and international artists is a current trend. Nevertheless, these collaborations are not only for creating media effects but also a stronger push for Vietnamese music, more factors must be included such as intrinsic strength, song quality, vocal quality - performance style, and professionalism in the international environment. In addition, the support of companies and multinational music activities have played a significant role in bringing Vietnamese music to the world.