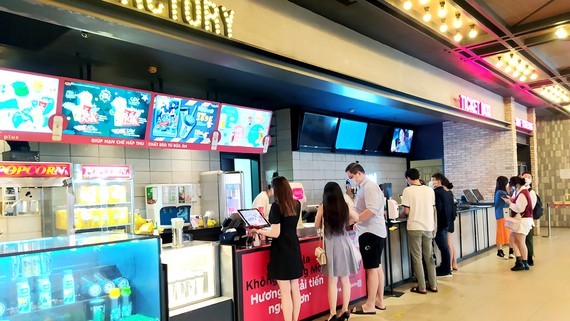 At the CGV Su Van Hanh cinema in District 10 in the evening of November 20
Director of BHD Star Cineplex, one of the city’s movie theater chains Le Hoang Minh said that every location with 28-30 screenings per day has seen a total number of only 100 customers, half of its capacity.
Other large movie theater chains, including CGV, Galaxy and Lotte have also received a small number of moviegoers back.
Ms. Hong Tham, a movie lover in Thu Duc City left the screening of the film titled “The Conjuring: The Devil Made Me Do It" (also known as The Conjuring 3) at the CGV Su Van Hanh cinema in District 10. She said that the screening had about 20 percent of the audience capacity.
Meanwhile a screening of “The Suicide Squad” at the Lotte Cinema Cong Hoa in Tan Binh District saw only four people, said Mr. Tran Xuan Phuc, a moviegoer living in Binh Tan District.
According to the Box Office Vietnam, 12 films have been presented to the public in the first three days from the cinema reopening. In which, three movies including “Black Widow”, “The Medium”, “The Suicide Squad” have earned over VND1 billion (US$44,000), followed by Thien Than Ho Menh (The Guardian) (more than VND560 million) and Lat Mat 5 (Face Off: 48H) (over VND85 million).
Moviegoers are required to display “Green Covid Card”, make e-health declaration, wear masks, measure body temperature and comply with the health ministry’s 5K message.
Just a few customers go to movie theaters due to worries and concerns about the Covid-19 outbreak, said representatives of the movie theater chains.
The pandemic has definitely changed consumers' behaviors, priorities, and purchasing habits. Consumer priorities have become centered on the most basic needs, added Mr. Le Hoang Minh.
Most of the movies shown in theaters now are old movies. Some movies have been leaked online because they were previously released overseas. Audiences knew the content of the film so they are not excited to go to cinemas, said Mr. Doan Thach Cuong, sale manager of Lotte Cinema Vietnam.
If the movie theaters have been allowed to open and maintain their operation as well as seen new movies coming, the film market will quickly regain its growth momentum, added audience Tran Xuan Phuc.

Many blockbuster movies will be released on the holiday season of Christmas and New Year. It is a favorable condition for movie theaters market’s growth. In addition, movie-theater experience is still worth and irreplaceable thanks to vivid digital images and audio, said Director of BHD Star Cineplex, Le Hoang Minh.
As planed, film lovers will have a chance to enjoy a lot of much-awaited movies to be released in November and December, such as No time to die, Shang-chi and the Legend of the Ten Rings, The Eternals, Venom: Let There Be Carnage, A Quiet Place Part II, Peter Rabbit 2: The Runaway, and Vietnamese films, including The Sweet Trap and two horror movies , The Ancestral: The Hour Is Coming and The Survive.