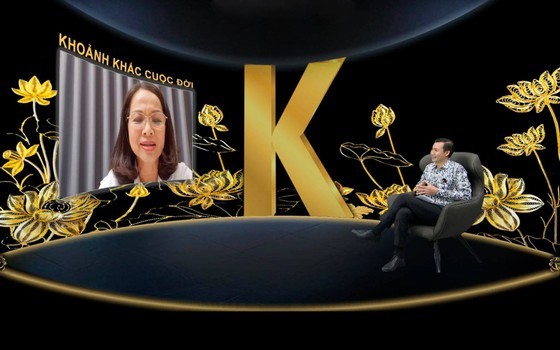 A television program
Though the company has prepared in advance to have some programs including game shows and movies broadcast during this period, the company has still faced many difficulties. One of the biggest difficulties is still not being able to produce shows in the field when the epidemic continues to drag on and the city has to implement a distance,” said Tran Anh Dung, Deputy Director of Vietcom Film.

The company is having many programs on air such as the Hello Happiness series, 100 million one minute, Super Vietnamese Dance Group - Vietnam's Best Dance Crew but had to stop the production process because of the epidemic.
Other film and TV show production companies have been bumping into the same obstacles. For instance, in early July, Dong Tay (East-West ) Promotion producer announced that it had to postpone the broadcast of Running Man Vietnam - Playing is running until mid-September, instead of airing in July.
A representative of Dong Tay Promotion producer revealed prior to social distancing applied in Ho Chi Minh City, Running Man Vietnam had completed recording some episodes. After that, strictly complying with the regulations on distance and ensuring epidemic prevention, the crew board stopped recording even though it had been detailed and planned. This means that Running Man Vietnam cannot be broadcast as originally planned.
Many gameshows comprising Strange, Mysterious Singer, Comedian Challenge, Dance Arena also had to stop the recording schedule, or casting. Even, instead of airing new episodes, many units accept to recap (recap) the highlights and interesting segments of some gameshows to broadcast.
In the respect of drama production, many films like Devil's mother, angel father of director Vu Ngoc Dang), I wish we could fly together of director Phan Dang Di, Dream Mother's dream of director Nguyen Phuong Dien that are in the process of filming must also be temporarily suspended.
Director Nguyen Phuong Dien’s Grid of Heaven has finished filming, but still has some difficulties related to post-production. Although a few days have left before the film closed, the production crew of the Mandarin Wife of Director Nham Minh Hien also paused. Previously, director Dung Nghe planned to shoot a new TV series in mid-June, after carefully preparing all stages. No one knows when it will re-start.
Lightning-fast gameshow in the third season has just created a surprise for TV viewers when it aired the special edition. The episode was notably made at each artist's home through a video call connection between MC Truong Giang and two guests Le Duong Bao Lam and Kha Nhu and recorded with a recording device.
Many viewers expressed their interest in this new version: "Like for the team's efforts and efforts to bring an entertainment program at this time", "Support the show for its efforts to gives the audience a new perspective”…
Similarly, the show Speed Match or Want to Date is also recorded in the same way. Rescheduled the broadcast, the production crew of Running Man Vietnam decided to carry out the Run From Home campaign, where not only the show's contestants but also many celebrities also participated in the challenge of exercising and cooking at home to spread positive energy, optimism and messages to protect yourself and improve health to everyone.
On his page, MC Pham Anh shared that he had just appeared on the program "Moment of Life" recorded online. He revealed to have an interesting and intimate feeling like telling a story to his friends, rather than talking as an MC on television.
The program's recent broadcasts are all done in this form, including special episodes with the appearance of experts, doctors, and noble deeds during social distancing such as Dr. Thu Suong, Anh Thu, Le Thi Ngoc Van, Doctor of psychology To Nhi A, or Pham Hong Minh, owner of a vegetable stall in the Southern Province of Dong Nai’s Bien Hoa City.
Director Nham Minh Hien said that from experience in the process of implementing two previous projects, Invisible Blood Drops and Against Fate, which was also affected by the Covid-19 epidemic, he and his crew were confident to ensure a safe return to work.
“When cinemas and stages are closed, the audience is accepting dramas, and my team and I make more efforts to affirm the position of Vietnamese films, build and strengthen our position in the hearts of the audience by improving the quality of the film”, he said.