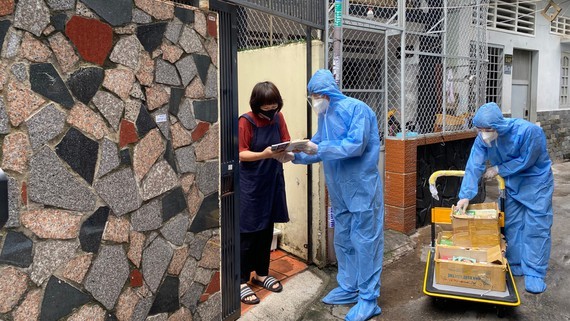 Books are brought to residents in blocked areas (Photo: SGGP)
Since mid-July, Ho Chi Minh City General Publishing House and leaders of Phu Nhuan District have donated books to people in quarantine and blocked areas in the district.
The program has donated nearly 1,000 books of various kinds including literature, children, culture, history, skills, health to city dwellers in blocked and isolated areas. People can listen to Audiobooks (audiobooks) with 200 books on the Voiz FM app within 30 days.

Additionally, around 1,000 vouchers were issued to people to access free movies on the Galaxy Play app in isolation facilities. Up to now, the program has donated books to 30 blocked zones and 4 concentrated isolation areas in Phu Nhuan District.
At the same time, the Ho Chi Minh City Youth Union, the office of Vietnam Publishing Association in the Southern region, and the Ho Chi Minh City Department of Information and Communications jointly implemented the program.
In a short time, the program has received more than 20,000 books of all kinds, including paper books, e-books, and audiobooks. Many publishing companies such as Youth Publishing House, National Political Publishing House, Saigon Books, Huy Hoang Books, Thai Ha Books, Fahasa, Quang Van Company have joined the program.
According to Mr. Le Hoang, Vice President of the Vietnam Publishing Association, the program of bringing books to readers in quarantined and isolated areas should be expanded because many provinces and cities across the country have been practicing social distancing.
Books were given just some places not all isolated and blocked areas meanwhile the demand is still great. Nevertheless, due to travel restrictions, employees of the publishing houses were unable to send books to the program.
After sending books to residents in Phu Nhuan District, on August 16, Ho Chi Minh City General Publishing House donated paper books and e-books to habitants in District 1 and districts 5 and 7 respectively. The program happily has created a positive effect.
Currently, the Ben Tre Provincial Youth Union has been working with this publishing house to equip e-books for two field hospitals in Ben Tre City, and isolation areas in two districts of Ba Tri and Thanh Phu.
Director of the General Publishing House of Ho Chi Minh City Dinh Thi Thanh Thuy said that the Covid-19 epidemic has affected the country for two years, many publishing companies are currently facing difficulties. Publishing companies can only partially support it because they are also facing difficulties while bookstores are not allowed to open. Worse, they can’t sell books on the internet as books are not classified as essential commodities; therefore, shippers can’t ship books to residents.