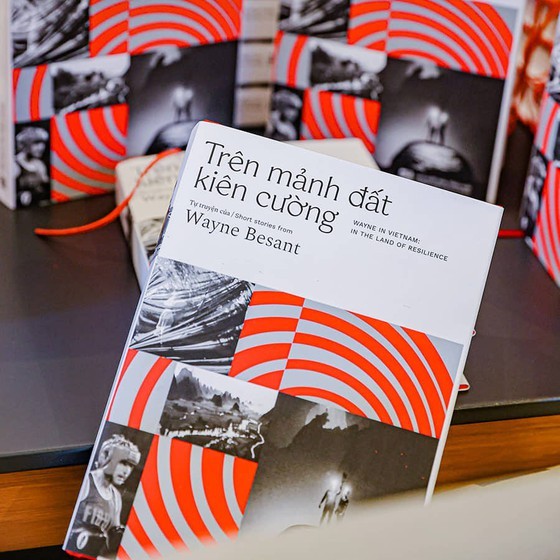 The book Tren manh dat kien cuong ( On Resilient Land)  about Wayne Besant's life and work after seven years of living and working in Vietnam.
The book Tren manh dat kien cuong ( On Resilient Land) published by the Ho Chi Minh City General Publishing House contains interesting and touching stories about Chief Executive Officer of AIA Vietnam, Wayne Besant's life and work after seven years of living and working in Vietnam.
Wayne Besant was born in New Zealand. After graduating with an Honors Master in Social Sciences and a Master of Business Administration with distinction, in 2015, when it was Easter in New Zealand, Wayne Besant suddenly announced that he had received a new assignment in Vietnam, a country that was still really vague in his mind. Moreover, he had only 12 hours to confirm an offer to take up a mission in a new country.
However, after seven years of living in this resilient land, he has had a chance to meet Vietnamese friends and traveled to 53 cities and provinces out of 63 provinces and cities across the country, Wayne has had interesting experiences and valuable insights about the Southeast Asian country. Therefore, Wayne Besant said he always wanted to share more about Vietnam with international friends and colleagues.
The book On Resilient Land has the appearance of an autobiography, giving readers interesting perspectives through the lens of a Kiwi in Vietnam who has captured the local culture subtly and fully experienced the reality. The book is written in a sincere and close manner, each word conveys Wayne's passionate love for the country and Vietnamese people.
In his autobiography, Wayne writes that he falls in love with this country, from his travels and experiences. Therefore, he thought it was his responsibility to do his best for customers, employees, agents, and the community.
Wayne's honest and close stories leave many emotions in readers. Mr. Hoang Van Tien, Director of the Vietnam Fund for Children, one of the first readers, said that he started working with Wayne right after Wayne arrived in Vietnam. Wayne has an amazing ability to assimilate into the community. After only a short time, Wayne has gained a deep understanding and proficient behavior in the local cultural environment.
The book on this resilient land is also marked by the leading art and business talent of the experienced CEO who has been leading AIA Vietnam Life Insurance Company to achieve impressive milestones, even during the most difficult period of the Covid-19 pandemic.
Wayne's experience helps him identify the three most important characteristics that make up the success of Vietnamese personnel including hard work, resilience, and commitment. In Wayne's view of point, that is also the characteristic quality of Vietnamese people. Those three virtues are also the foundation for Wayne and his team to learn, grow and succeed.
It is known that profits from book sales will be given to Ba Chieu Social Protection Center, founded by the former New Zealand Ambassador to Vietnam nearly 25 years ago, which takes care of many orphaned girls in Ho Chi Minh City.
Wayne said that the orphanage has a special place in his heart as connection between New Zealand and Vietnam is imprinted, and he hoped that the relationship between the two countries will last forever.