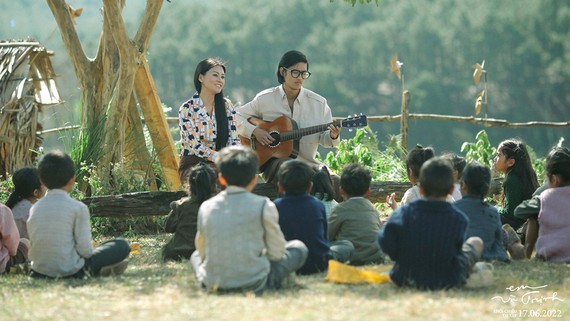 A scene in Trinh and I movie
The bullet of the madman by director Luong Dinh Dung hit theaters on May 20, overwhelming the audience with the team's willingness to spend on the film. The film has a series of great scenes flattering viewers and making a strong visual impression.
In particular, the scene at Dinh Vu port in the Northern City of Hai Phong over an area of 20,000 meters square with more than tens of thousands of containers is the highlight. The film crew also mobilized 57 container trucks and seven 25m-high light cars to meet the light for big action scenes.
For the rain scenes, many complex rain systems were mobilized, each day the crew had to use up to 20,000-30,000 liters of water. Director of photography Morgan Schmidt admitted that Dinh Vu Port was the most difficult scene in the film.
Meanwhile, although it will be released on June 17, the producer of the film Trinh and I has just revealed the cost of VND50 billion (US$2,1 million).
It took five years to make the film with 40 key actors, 3,000 mass actors, and 1,000 costumes during 65 days of filming. Ms. Vu Quynh Ha, representative of the film producer said that a movie usually has only two songs but 39 songs will be sung in the film. That’s why the production cost of Trinh and I is many times higher than other films.
Moreover, all the scenes in the film are very expensive, because of going through many different stages in the life of musician Trinh Cong Son. Director Phan Gia Nhat Linh said that it is time for the market to have such films because the majority of the audience also likes big-budget films.
According to Tuong Vi, film producer from CJHK, it’s a good sign that movies have received a large amount of investment because it proves that investors take heed of this field, especially after a long hard time because of the epidemic.
She added that cinema needs to grow, and the increase in budget is one of the important factors. From there, personnel in each position receive more appropriate remuneration.
It is not until this time that investors agreed to spend more money on film production compared to other fields. For instance, in 2014, producer and actress Truong Ngoc Anh announced spending US$4 million (about VND80 billion) to implement the movie I Am Wanted whose detailed information has not been revealed so far.
The well-known actress’ legendary film project Trung Vuong will also consume a lot of money. Among the completed and released films, Trang Ti directed by Phan Gia Nhat Linh had an investment of VND43 billion while Gai gia lam chieu (The very old girl V) of Bao Nhan - Namcito was also made with a budget of about VND46 billion and the Penitentiary film of Peter Hien is planned to cost VND50 billion.
Director Phan Gia Nhat Linh said that each project has a different production budget. But, a movie must have the necessary budget to meet the needs of the script, not talking high or low. Not every project has to have a lot of money or a little money. There are films that can be made with only VND1 billion whereas there are other films that can't be made with VND30 billion.
All producers agreed that big-budget movies do not mean high-quality and high-grossing movies; even in the Hollywood movie market, when many movies invested hundreds of millions of dollars still receive negative reviews and fail at the box office.
For instance, Town & Country or The Promise both invested $90 million but only earned more than $10 million in revenue, while The Adventures of Pluto Nash earned $7.1 million against a $100 million budget. In fact, producers of big-budget films such as Confession, Trang Ti, Loi Bao, and Immortal can’t recover their capital.