The organizing board also presented four Cricket Desire awards to a collection of paintings that depict the country’s fight against the novel coronavirus (COVID-19) by 10-year-old Nguyen Doi Chung Anh, a long story by 12-year-old Cao Khai An, a collection of 7 short stories by primary school teacher Nguyen Chi Ngoan and a collection of songs on children theme by music composer Nguyen Van Chung.

De Men Arts Awards for Children aims at promoting and honoring works dedicated to children. The entries can be in one of several forms like literature, cinema, music, arts, theatre, photography, comic, traditional games or electronic games. The awards will include one grand prize named 'Cricket Knight' and others, 'Cricket Desire'.
De Men (Cricket) is named after the main character in the famous Vietnamese children's story, De Men Phieu Luu Ky (Diary of a Cricket) by To Hoai. This is one of the most popular stories of Vietnamese children for many generations.
Launched in May, the organization board, The Thao & Van Hoa (Sport & Culture) Newspaper, received more than 100 entries.
Speaking at the award ceremony, writer Nguyen Nhat Anh affirmed that he will continue to pursue his passion for writing for children.
Nguyen Nhat Anh is a favorite author of children, teenagers and adults. His well-known novels recently published include Toi la Beto (I am Beto); Cho Toi Xin Mot Ve Di Tuoi Tho (Give me a ticket to childhood); Dao Mong Mo (Dream Island); and Toi Thay Hoa Vang Tren Co Xanh (I see yellow flowers on green grass) and more. Anh was granted the Southeast Asian Writer Award 2017 for the book Cho Toi Xin Mot Ve Di Tuoi Tho (Give me a ticket to childhood). 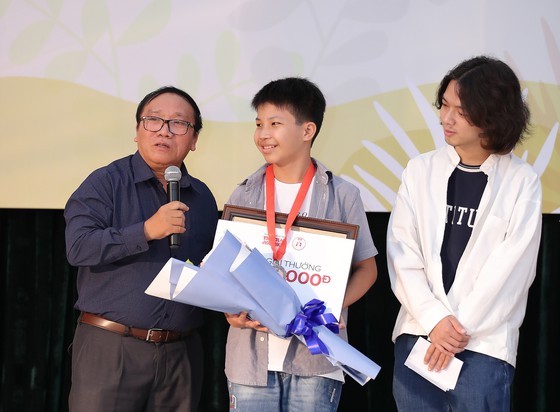 Cao Khai An, 12 gets  the Cricket Desire award.

By Mai An - Translated by Kim Khanh