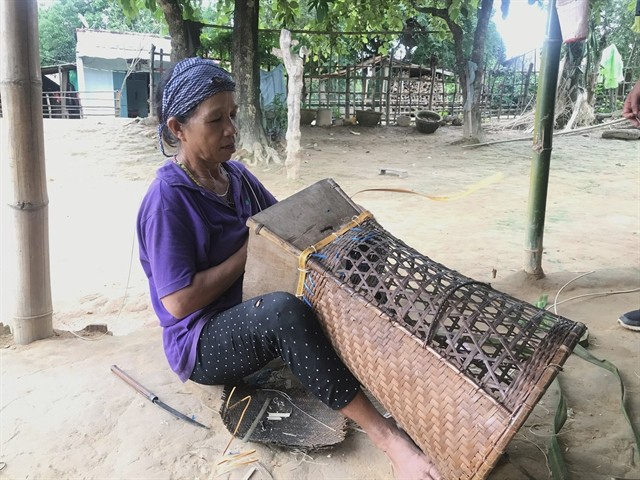 For the Ro Ngao people in Kon Trang Long Loi Village, the wicker basket is a cultural symbol of the entire ethnic community. (Photo: VNS)
For the Ro Ngao (a branch of the Ba Na ethnic minority), basketry is considered absolutely central to the very soul of their cultural identity.

A Yak, 62, learnt to make baskets from his father as a young boy. It was during trips to the local forests that he became entranced by his father’s stories about the art and craft of basketry.

When he was just 12 years old he wove his first basket, a skill that is essential for any Ro Ngao man to gain a wife.

“For us Ro Ngao people, for a man to be considered the head of a family he must be a skillful weaver who can make various kinds of wickerwork, especially baskets,” he says.

“A common round basket with an open top is made of bamboo wicker, while its strap is from rattan.”

He says it is essential for a man to decorate the basket with different patterns and bright colors to easily attract girls in the village.

“For us, this craft is not only something that has been part of a tradition here for a long time but part of the cultural identity of the entire community. Most of our houses have woven items like wicker baskets and fishing nets,” says the Kon Trang Long Loi villager.

“They are considered valuable assets and are handed down from generation to generation or are used as gifts when our children get married.”

Though Yak, basket weaving is proof of maturity and manliness, for others the work is key both mentally and physically. It is something that allows them to build a family and overcome life’s difficulties. 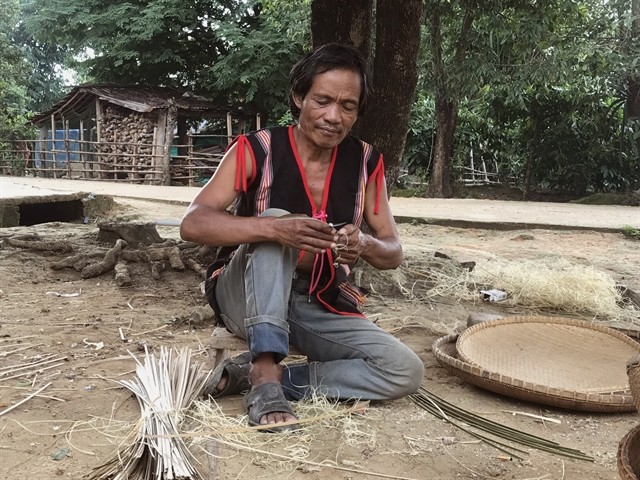 For A Ub, wickerwork making helped him through the most difficult times of life. (Photo: VNS)
“I lost my parents when I was just a boy,” says A Ub, one of the villagers. “At that most desperate moment in my life, I found a glimmer of hope in making baskets.”

Back then a single piece of wickerwork could be exchanged for a kilogram of rice, the villagers' staple food, so Ub and his friends wove like their lives depended on it.

“I have saved enough money to buy two more acres of land to grow cassava so that I can make a more sustainable income for my family,” says the 58-year-old man. “In my free time, I also make miniature communal houses to sell to tourists.”

“Many tourists give me compliment about my models, saying that they’re sturdier and more beautiful than those of other souvenir shops, I sell them for VND500,000 each. Thanks to basket weaving, my family's condition has improved. My children have food, clothes and are able to go to school.” 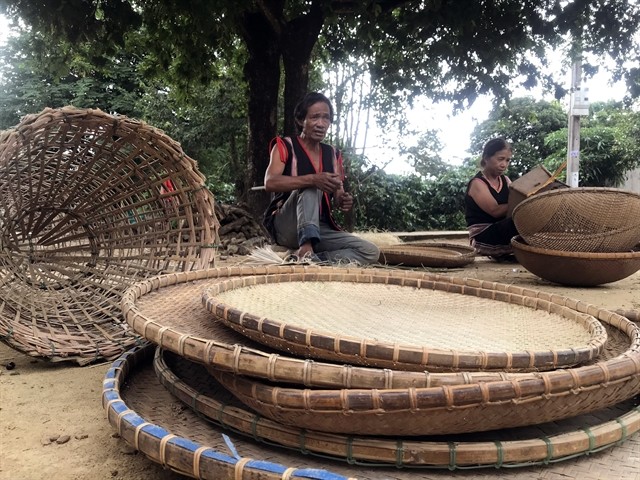 Many villagers in Kon Trang Long Loi, Dak Ha District, Kon Tum Province, gain substantial income thanks to basketry. (Photo: VNS)
Despite the craft being so central to the Ro Ngao, both culturally and financially, the younger generation are largely disinterested, and there is a widespread fear this ancient tradition might slowly fade away.

According to A Kay, head of the Department of Culture and Information of Dak Ha District, local officials have been encouraging villagers to preserve the ancient craft.

After much effort, the future looks promising as more and more families are now encouraging their children to attend the local basketry classes.

“More than 20 people have participated in the free classes, including seven children in the village who can now make simple products by themselves,” Kay says.

“The classes have helped me understand the history as well as the beauty of my village’s tradition,” 14-year-old Y Dam says.

“I will try my best to learn and improve to continue making more products that represent my homeland.”

It aims to help villagers gain more income and motivate the younger generation to pursue traditional crafts, contributing to the preservation of precious values of the ethnic Ro Ngao culture.