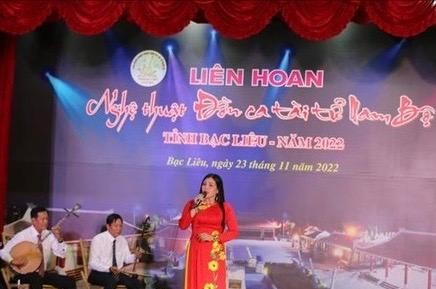 A singing performance at the opening ceremony
The 3-day event which is part of the 2022 Bac Lieu Culture-Tourism Festival and Da Co Hoai Lang Festival attracts 10 art troupes of Don Ca Tai Tu Nam Bo with 150 artists from provinces and cities in the region.
The festival is expected to attract visitors to the province and contribute to improving the quality of the cultural and arts movement in Bac Lieu.
UNESCO recognized Don Ca Tai Tu Nam Bo as an Intangible Cultural Heritage of Humanity. The southern amateur traditional music was recognized for the prize at the 8th Session of the Intergovernmental Committee for the Safeguarding of Intangible Cultural Heritage held in Baku, Azerbaijan in December 2013.
The southern traditional music style has been honored because it is a legacy passed through generations to recreate cultural exchanges between ethnic groups, according to experts in UNESCO.
Born 100 years ago, it has been a long-standing cultural tradition in the Mekong Delta since the end of the 19th century. Don Ca Tai Tu Nam Bo meets the criteria because it is passed down through generations in southern provinces, re-creates via cultural exchanges, presents a concord and respect among ethnic groups.
Musician Cao Van Lau is known as the ancestor of Cai Luong (southern traditional opera) and stage and well-known for an immortal Cai Luong piece, "Da Co Hoai Lang" (Night Drumbeats Cause Longing for Absent Husband). The legendary composition was written in 1919 and tells the story of a wife who waits for her husband to return from the battlefield. The song never fails to leave a deep impression on millions of devotees. Bac Lieu is the birthplace of the song.
A memorial site of musician Cao Van Lau located in the place where he was buried in 1976 in Bac Lieu Province was recognized as a national historical-cultural site in 2014.