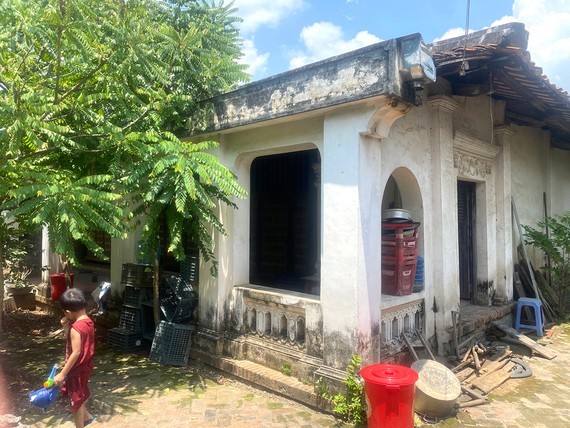 One of ancient houses in Dong Nai falls into ruin (Photo: SGGP)
The 1,200-square-meter old house includes an upper house, lower house linking with the kitchen in the form of Chinese letter two. The frame made of precious wood is decorated and carved finely with highly artistic folk themes, becoming a brilliant work of art, representing the type of civil architecture in the 19th century in Dong Nai Province particularly and in the South generally.

In 2002, the Organization for Culture and Cultural Restoration and Japanese Chieu Hoa Women's University donated VND800 million to restore and repair the old house. The house was carefully restored just as its origin.

In 2004, Tran Ngoc Du ancient house was awarded by UNESCO "Award for merits of ancient Vietnamese house architecture" and in 2005 it was ranked as a provincial-level architectural and artistic relic by the People's Committee of Dong Nai Province.
However, when the old house was just recognized as a relic, scores of curious guests paid visits to it later but no one dropped by it anymore.
According to Nguyen Van Toan, grandson of Tran Ngoc Du, who is currently living and taking care of the old house, since 2005 until now, the local authority has not once visited and checked the house even though the house is seriously degraded.
The front garden area facing the Dong Nai River is overgrown with weeds and trees like a wild garden by the time a reporter from Sai Gon Giai Phong got back. Around the house, garbage, flower vases, pieces of porcelain, pots, and pans, dishes, chopsticks, damaged wooden chairs are scattered. It looked dirty. In addition to rotting trees, the yin and yang tile roof of the house has been so damaged in many places that a strong wind or an animal running can pull them into piles, creating large openings that let the sunshine everywhere.
Another provincial-level relic site located in Quang Vinh Ward in Bien Hoa City has been neglected for a long time. It is Bien Hoa Ancient Citadel which is considered the only existing ancient citadel in the Southeast. In 2014, Dong Nai Provincial People's Committee invested VND41 billion for the restoration and embellishment project’s first phase to preserve the Eastside, the Westside, and the city wall system.
Currently, the Bien Hoa Ancient Citadel’s gate is still occupied and used as a home-based business; therefore, no visitors dropped by the relic site.