The music show was held in July, aiming at celebrating the late musician's 50-year career and encouraging him keep fighting against the illness. Musician Pho Duc Phuong passed away at 76 in Hanoi on September 19 after battling a long illness. The veteran composer is one of the big names in the contemporary folk music in the country.

His popular songs win hearts of music lovers, such as Nhung Co Gai Quan Ho (Quan Ho Folk Singing Female Performers), Ho Tren Nui (Lake on Mountain), Khong The va Co The (May be and May be not), Mot Thoang Tay Ho (A Glimpse of West Lake), Huyen Thoai Ho Nui Coc (The Legend of Nui Coc Lake), Ve Que (Going Back to Homeland), Vu Khuc Con Co (The Dance of Stork).
He made outstanding contribution to protecting the rights of authors of musicians in the country.
This year’s contest received 205 submissions of members of the Vietnam Musicians Association throughout the country. The organization board awarded 78 prizes in categories of compositions, children songs, chamber music, symphony, choir and music critique.
In the field of instrumental music, authors focused on the topics of history, revolutionary war, love of the country, the nationality and the combination of traditional and modern music while the "vocal music" area saw a larger number of entries than last year, and the “children’s song” sector got many best compositions, said musician Do Hong Quan, Chairman of Vietnam Musician's Association. 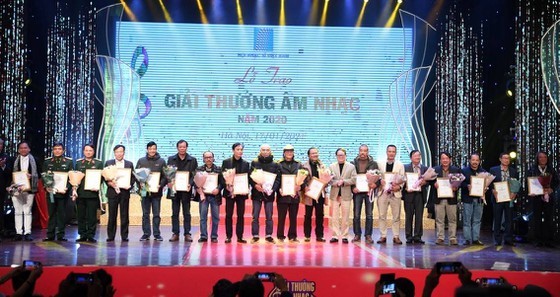 The organization board awards 78 prizes.