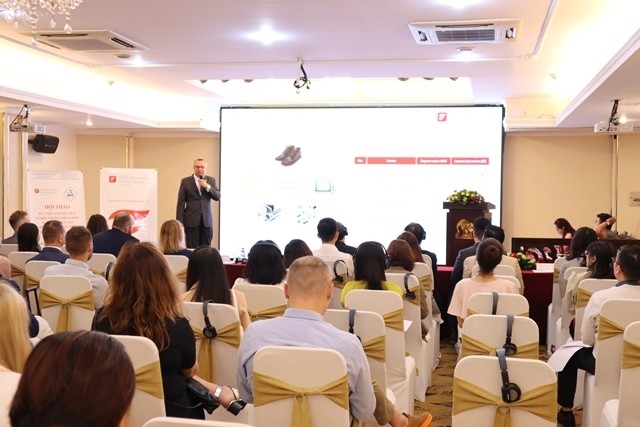 At the conference (Photo: dangcongsan.vn)

Poland is now the fifth largest cosmetics producer in the European Union and is seeking new markets, said Business Development Manager of the city-based Office of the Polish Investment and Trade Agency Ho Thi Hanh Ngan.

Ngan described Asia as the world’s biggest cosmetics market, with nearly 660 million potential consumers and about 38 percent of the global revenue. Hence, Polish firms wish to step up trade with Vietnam to effectively navigate ASEAN and Asia, she said.

At the event, the two countries were also said to serve as an important bridge to elevate trade and investment between the EU and ASEAN.

ITPC Deputy Director Nguyen Tuan said in the EU, Poland was one of the first partners to establish diplomatic ties with Vietnam. It also has growing economic and trade ties with the Southeast Asian nation. Poland is now Vietnam's top trading partner in Eastern Europe while Vietnam is Poland's seventh largest partner outside the EU.

In the first nine months of this year, two-way trade surpassed US$2 billion, over US$1.8 billion of which involved Vietnamese exports. Major cooperation areas include farm produce, pharmaceuticals, cosmetics, green technology and wastewater treatment.

Statistics showed that Ho Chi Minh City is now home to 238 markets, 206 supermarkets, 49 shopping malls and 2,656 convenience stores. It is expected to become a merchandise distribution hub of the entire southeast region and nearby provinces.

Experts hailed Vietnam as a promising market for retail sectors such as healthcare, cosmetics, mother and baby products, fashion, sports and food, with new brands coming to serve young customers.

Chief Representative Officer of the Polish Investment and Trade Agency Piotr Harasimowicz said on the back of important tax incentives brought about by the EU-Vietnam Free Trade Agreement, Vietnam could access a wider EU market with its 500 million population.