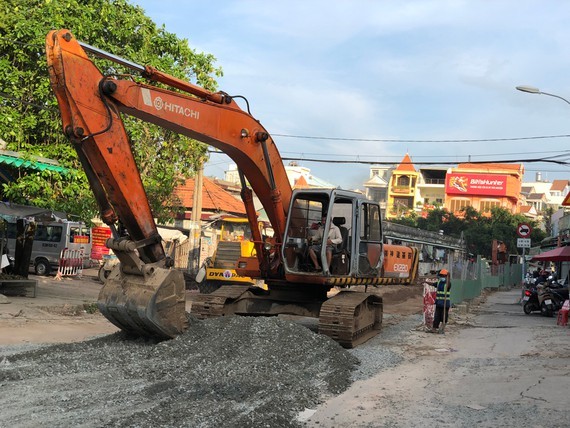 In mid-November, many works have started again. The sound of excavators, cranes, welding machines is being heard on many roads and alleys. At Bach Dang Wharf Park in District 1, workers are carrying out renovation and upgrading of the park. Currently, the project is gradually reaching the finish line and promises to be the highlight of Ho Chi Minh City's tourism.

In Quang Trung, Nguyen Thai Son, Duong Quang Ham, Nguyen Van Cong streets in Go Vap District, many constructions works in alleys in residential areas have also been restarted such as installing drainage systems, spreading plastic. Resident Hoang Van Vinh in Nguyen Van Cong Street revealed the alley construction work was performed before the epidemic, many small alleys on this road have been completed, paved with flat asphalt, clean. After the city returns to the new normal, some alleys are under construction again, hoping to complete the renovation before the 2022 Lunar New Year.

In its recent report on the implementation of key tasks in 2021to the People's Committee of Ho Chi Minh City, the Department of Transport said that it has developed plans and solutions to speed up the key investment projects including the construction and expansion project of the National Highway 50 through Binh Chanh District, a road connecting Tran Quoc Hoan and Cong Hoa streets in Tan Binh District. Moreover, the Department is speeding up the construction progress of underground tunnels at the Nguyen Van Linh - Nguyen Huu Tho intersection in District 7 as well as a new East Bus Station overpass on Hanoi Highway in Thu Duc City.

In particular, the city has also completed construction and put into operation works that are expected to reduce congestion and traffic accidents in HCMC such as Phuoc Loc Bridge in Nha Be District, Nguyen Huu Canh Street, upgrade and expansion of Bui Dinh Tuy Street. The Department of Transport disclosed that compensation for site clearance by districts is still slow, leading to suspension of construction; therefore, disbursement of the assigned capital plan lags behind the plan.

Investors and people's committees in districts of construction sites have not worked closely for the implementation of the projects. During the implementation of social distancing mandate due to the Covid-19 epidemic, Industries across the country are facing an unprecedented labor and material shortage and the construction industry is no exception.

According to the representative of the city's Management Board for Traffic Works Construction and Investment, the unit is working with related units, people's committees in districts to strive for completion of works and projects to solve congestion and flooding in the southern metropolitan areas. In particular, the Management Board of the Investment Project of Traffic Works in Ho Chi Minh City will open a branch of Bung Bridge to the traffic and upgrade Dang Thuc Vinh Street in Hoc Mon District with an expectation to erase flooded areas.