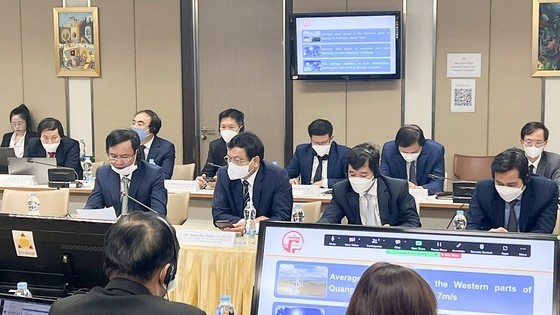 The scene of the meeting. (Photo: SGGP)

Mr. Vo Van Hung, Chairman of the People's Committee of Quang Tri Province, informed about the difficult situation of the Quang Tri 1 BOT Thermal Power Plant project invested by Thailand’s EGAT International Co., Ltd. This project has caused Quang Tri Province to be in a passive situation and face difficulties and pressure in local socio-economic development.

After considering the recommendations of the People's Committee of Quang Tri Province, assessing adverse factors and objective obstacles in the financial arrangement of the project and equity after nearly 11 years of preparing and fully implementing the COP26 commitments to achieve net emission reduction to zero by 2050 of the Governments of Vietnam and Thailand, the Ministry of Energy of Thailand confirmed to stop the implementation of this project and will soon have an official document sent to the Ministry of Industry and Trade and Quang Tri Province.

The Quang Tri 1 BOT Thermal Power Plant project in the Southeast Quang Tri Economic Zone was approved by the Prime Minister to assign EGAT International Co., Ltd., as an investor under the model of built-operate-transfer in August 2013.

At the end of 2019, EGAT International Company held a groundbreaking ceremony for Quang Tri 1 BOT Thermal Power Plant. The project has a total capacity of 1,320MW (raw capacity), including two units with a capacity of 660MW each. Quang Tri 1 BOT Thermal Power Plant Project, when put into operation with the above capacity, will generate power 6,000 hours per year, generating an electricity output of VND7.2 trillion Kwh per year and pre-tax revenue of about VND12.5 trillion per year. Annually, it is expected to pay VND1.25 trillion per year into the provincial budget. The project has a total investment capital of VND55.09 trillion.