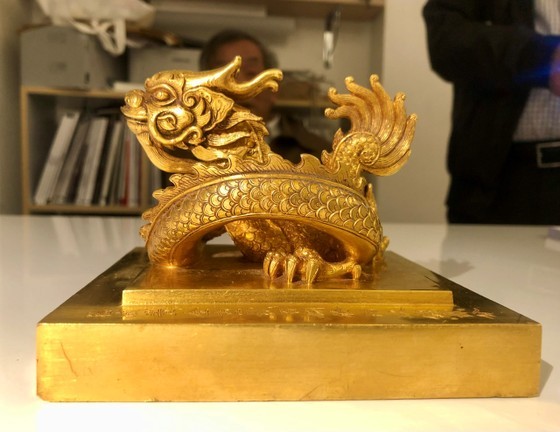 The Ministry of Culture, Sports and Tourism said in a statement on November 14 that the sides agreed to carry out relevant legal process and procedures for the repatriation of the seal to Vietnam in accordance with the laws of both nations, in the spirit of their mutual understanding and the Vietnam-France friendship and relationship.

The ministry said it will make effort to complete the work as soon as possible.

The inter-ministerial working delegation was formed shortly after in a bid to negotiate with Millon with regards to the seal’s authenticity and repatriation.

On the basis of collected evidence, verification through Millon-published information and images, and comparison with some golden seals of the Nguyen Dynasty being kept at some Vietnamese museums and relic sites, the seal supposed to be auctioned was confirmed to be the “Hoang de chi bao” (Treasure of the Emperor) cast in 1823 under the reign of King Minh Mang.

After negotiation efforts, the Vietnamese representative and Millon reached an agreement on deferring the auction of the seal on October 31, with the auction house issuing an official statement about the removal of the item from the list of antiquities to be auctioned on the day.

According to the ministry’s Department of Cultural Heritage, the determination to repatriate the seal aims to not only recover lost antiquities and cultural heritages but also affirm the country’s stature and influence, helping affirm the Party and State’s viewpoint on preserving and bringing into play the cultural heritage values, develop an advanced culture deeply imbued with the national identity of Vietnam, and contribute to the world’s cultural heritage. This is highly meaningful to safeguarding the integrity of cultural heritage – an important issue that UNESCO pays great attention to in cultural heritage preservation, and also demonstrates Vietnam’s role in implementing the international conventions to which it is a party.