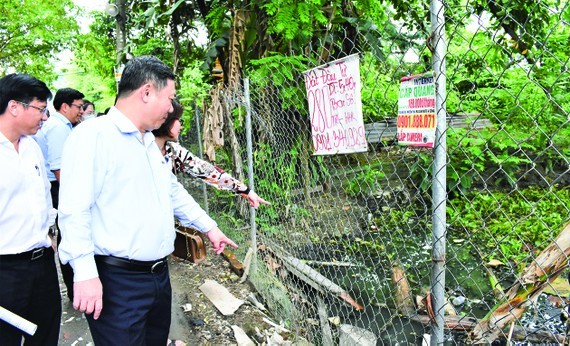 The delegation visited a number of residential areas, schools and businesses in the area of Binh Hung Hoa B ward in Binh Tan District and Vinh Loc A Commune in Binh Chanh suburban district, especially in densely populated areas, dilapidated rooms, many garbage stagnation points, water containers with larvae around people's houses.

According to Chairman of the People's Committee of Binh Hung Hoa B ward Pham Hoang Khanh, a lot of workers and employees of the Vinh Loc Industrial Park are living in dilapidated and small accommodations in the ward so it is a densely populated area; as a result, the control of dengue epidemic mission is facing difficulties.

Currently, the ward has 249 dengue fever cases in 210 risk points, so far, the local administration has eliminated 86 points, and 124 points are being monitored and handled. Local administrators and medical staff are stressed in carrying out dengue epidemic prevention and control. They have written 78 minutes to remind and sanction households and businesses for not ensuring their commitments to prevention and control of the epidemic.

Administrators in Vinh Loc Commune are also worried as the commune has 532 cases of dengue fever, an increase of 440 cases compared to the same period in 2021, Chairwoman of Vinh Loc A Commune People's Committee Lai Thi Bich Tram said that administration staff has gone to each household increasing residents’ awareness of the dengue epidemic as well as reminding them to prevent dengue by taking practical deeds.

However, the locality has many stagnant ponds and landfills that spontaneously become places for mosquitoes to breed. In addition, many people are still neglectful of preventative measures to clean up waste and clean the environment; moreover, they are reliant on the local government’s measures against the disease whereas the commune is currently short of Chloramine B drugs to treat and disinfect high-risk spots.

Currently, Binh Tan and Binh Chanh districts have more than 2,000 points at risk of spreading or outbreak of dengue fever.

Therefore, leaders of Binh Tan and Binh Chanh districts need to direct the prevention of dengue fever in the coming time, minimizing the number of cases and deaths in the two districts.

In addition to administrative sanctions, authorities should regularly re-inspect. If residents and organizations have not taken measures against dengue, the People's Committees of wards and communes continue to decide on the highest sanction of VND3 million according to Clause 2, Article 6 of Decree 117/2020 of the Government for individual violators and VND6 million for a business facility.

This year, the number of dengue fever cases has increased very rapidly, and the risk of epidemic overlapping may occur, so propaganda and advocacy to change people's habits and lifestyles must be done better. According to him, the Center for Disease Control in Ho Chi Minh City must particularly change its way of doing things, not only focusing on printing banners and leaflets to bring to the locality.