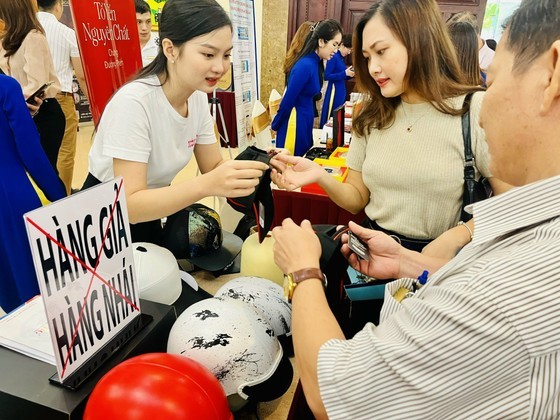 Consumers are instructed how to distinguish genuine goods and counterfeit goods

They made the warning at a seminar on "Application of digital transformation in the prevention and combat of counterfeiting" held by the Representative Office of the National Office of Intellectual Property in Ho Chi Minh City in coordination with Vina CHG Company and the Vietnam Invention Association.

At the seminar, leaders of competent agencies warned of sophisticatedly-made fake stamps, QR codes, and packaging of various brands of anti-counterfeiting genuine ones that have been rampant in the market.

Mr. Tran Van Dung, Deputy Director of the Operations Department of the General Department of Market Surveillance, acknowledged that counterfeit goods are a burden to society. Many best-selling items including clothes, shoes, and food in the market are counterfeited. The end of the year is also the time when counterfeit goods and commercial fraud are rampantly sold especially on social networks.

According to preliminary statistics of the National Steering Committee 389 , from the beginning of 2022 until now, competent forces across the country have detected and handled about 100,000 violations. Amongst them, 12,275 are smuggling, and 82,678 cases of commercial fraud, tax fraud and 1,866 cases of counterfeit goods, and intellectual property violations.

Mr. Nguyen Ngoc Ty, CEO of Non Son Fashion Company, pointed out that e-commerce platforms have significantly contributed to the promotion of fake goods which are a concern of genuine business enterprises. More specifically, Mr. Ty said that some major e-commerce platforms such as Lazada, and Shopee have both advertised and sold genuine products and fake goods.

He suggested promoting communication to help consumers how to identify real and fake products so that they can distinguish between the two kinds. Production and trade of fake goods have generated super profits, so the fine of several hundred million Vietnamese dong is not tough enough to deter people from making and selling counterfeit commodities. In addition, authorities need to handle violations quickly to help honest businesses avoid the prolonged legal procedure.

Typically, Non Son Company has worked with the Ho Chi Minh City Police to break a fake Non Son production establishment from the beginning of 2020, but the case has not been resolved so far. Through the company's own reconnaissance, Non Son owner grasped information about the violators in the above-mentioned Non Son counterfeiting case from the beginning of 2020, they are now committing the violation again.

Mr. Nguyen Viet Hong, General Director of Vina CHG, disclosed that in the near future, the company will launch anti-counterfeiting technology on packaging.