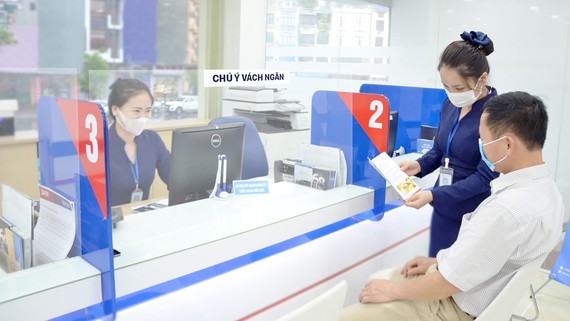 Because the foreign room is almost exhausted, many commercial banks have to lock it to wait for a good opportunity to sell shares to foreign strategic partners. If they do not lock the foreign room, individual investors will buy all shares on the stock exchange. From May 2021, VPBank has kept the foreign room at 15 percent. This commercial bank officially expanded the foreign ownership ratio from 15 percent to 17.5 percent on March 4, 2022. On that day, foreign investors bought its shares massively on the exchange, making VPBank's stock jump by nearly 3 percent during the trading session.

At a recent meeting with investors, VPBank informed that the private placement for strategic partners remained as planned, expected to be completed in the first half of 2022. If the private placement is successful, the equity of this commercial bank will possibly reach VND125 trillion after the issuance to foreign strategic shareholders, making it one of the leading commercial banks with the highest charter capital in the banking system.

Similarly, from August 2021, SHB has temporarily locked foreign room at 10 percent to implement the plan of offering and issuing shares to foreign investors. SHB has recently adjusted the foreign room from 10 percent to a maximum of 30 percent. SHB leaders said that some international financial groups, banks, and investment funds wanted to become its strategic investors.

OCB has also been locking foreign room at 22 percent to carry out the plan to make private placement for 70 million shares (5.1 percent of total circulating shares) to foreign strategic shareholders, expected to be completed in 2022.

Sacombank said that it would sell about 30 percent of shares to foreign investors after completing the restructuring in 2022. Some commercial banks that still have foreign room, such as Nam A Bank, VietCapitalBank, Kienlongbank, VietA Bank, and SCB, also locked foreign room because they plan to find foreign strategic investors this year.

Expanding the foreign room is an urgent need

Commercial banks said that if the foreign room was opened, it would attract capital, helping to improve the internal resources of banks in the long term and share management experience; enhance financial capacity, speed up the progress of bad debt settlement, especially the existing risk of bad debt due to the impact of the Covid-19 pandemic. Not only private commercial banks but State-owned commercial banks like Vietcombank have also proposed to expand the foreign ownership ratio to 35 percent to help the bank better meet capital adequacy regulations and have more resources to expand credit and support economic growth.

Dr. Nguyen Tri Hieu, a banking and finance expert, assessed that the low foreign room is the reason why M&A deals in the banking sector have been quiet lately. Many foreign investors are interested in enterprises in the financial and banking industry. However, the low foreign ownership ratio has made them withdraw because they are afraid that it will be difficult for them to participate deeply in the corporate governance process.

“While the interest of foreign investors in this sector is extremely great, the Government should consider loosening the foreign room, so that banks can lure capital from foreign investors to increase financial potential, enlarge scale, and speed up the progress of bad debt settlement," Dr. Nguyen Tri Hieu suggested.

According to Viet Capital Securities Company (VCSC), the regulation on the maximum foreign ownership ratio makes it difficult to loosen the foreign room for all commercial banks. Although the four large State-owned commercial banks (Big 4) are not expected to expand the foreign room, it is possible to raise the ownership ratio of foreign investors in some private joint-stock commercial banks. Because, according to the Vietnam - EU Free Trade Agreement (EVFTA), which took effect from August 2020, Vietnam commits that within five years from the signing, it will allow European credit institutions to raise the ownership ratio to a maximum of 49 percent of the charter capital of two joint-stock commercial banks in Vietnam without having to wait for the decision to open the foreign room by the State management agency. Therefore, it is necessary to consider and research to come up with an appropriate limit of ownership ratio and provide a roadmap following Vietnam's commitments to the world.

Mr. Nguyen Quoc Hung, General Secretary of the Vietnam Bankers Association, said that it is necessary to consider increasing the foreign-owned shares limit in Vietnamese banks, which will attract capital flows from foreign investors, helping commercial banks raise equity, improve financial capacity and competitiveness. However, the expansion of foreign room should be cautious, ensuring the harmony of interests and needs of investors in the role of State management. The foreign-owned shares limit may be regulated in the direction of classification by bank group, based on the rating of the State Bank of Vietnam. Banks that have completed Basel II standards and are upgrading to Basel III standards can expand the foreign room ceiling to over 30 percent.