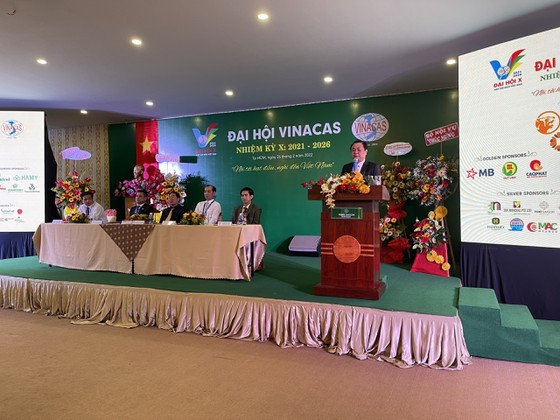 The scene of the 10th Congress of the Vietnam Cashew Association. (Photo: SGGP)

In 2021, the cashew nut exports were estimated to reach $3.65 billion, up 14 percent in value over the same period in 2020. According to the 2022 crop production plan of the Ministry of Agriculture and Rural Development (MARD), the total cashew area of the whole country will remain stable at 305,000 ha, and the average yield will be 1.25 tons per ha. The output of dry raw cashew is expected to reach 370,000 tons. The cashew industry sets an export target of cashew nuts of US$3.8 billion in 2022, up 3.9 percent in value compared to 2021. Regarding the import of raw cashew nuts, based on the processing demand and development strategy of the cashew industry, it is forecasted to maintain an import volume of about 2 million tons.

Mr. Nguyen Minh Hoa, Vice Chairman of VINACAS, said that in 2021, Vietnam would continue to maintain the position of the largest cashew exporter in the world, accounting for 80 percent of the total cashew nut export volume of the world. Vietnam's cashew holds a dominant market share in key markets, with 90 percent in the US and China, 80 percent in the Netherlands, and 60 percent in Germany. However, Vietnam continues to be a country that imports preliminarily processed cashew nuts in large quantities from African countries. Besides exporting preliminarily processed cashew nuts to Vietnam, African countries have also increased their direct cashew nut exports to Europe due to the geographical advantage.

Regarding raw cashew nuts, Vietnam made two records in 2021, the largest import record ever and the record of importing over 1 million tons of cashew from Cambodia. According to this result, Vietnam will affirm that it is not only the world's leading cashew nut supplier in both quantity and quality and the country with the world's most advanced cashew processing technology and equipment but also the country with the most important role for the global raw cashew market.

From the actual situation and the requirements for the development of the cashew industry, in the 10th term, VINACAS will promote building to propose to the Government the development strategy for Vietnam's cashew industry in the new situation. It will put forward the State's mechanisms and policies to achieve two major goals, including strongly developing deep processing, meeting the diverse needs of the global market, gaining a worthy position in the global cashew value chain, and strongly developing the raw material growing area with high quality and efficiency; both creating autonomy in the source of quality raw materials for processing, and contributing to the successful implementation of the agricultural development policy of the State.

VINACAS will support members and businesses to remove specific obstacles and difficulties in production, trading, import, and export; propose the MARD to implement programs and projects on seedling, improving cashew plantation, and new farming processes to improve productivity and quality of raw cashew; continue to support the Cambodian cashew industry to build a strategic raw material growing area for Vietnam.