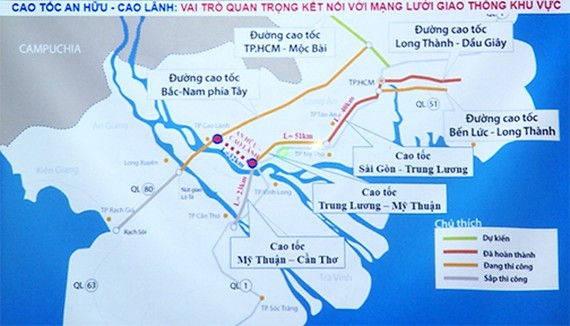 The project's capital investment proposal is more than VND6, 000 billion (over US$262 million), including th cost for resettlement of VND719 billion.

Under the master plan on the road network for the 2021-2030 period, with a vision toward 2050, Cao Lanh – An Huu four-lane expressway has a length of 27.43 kilometers, starts at the My An- Cao Lanh Highway in Dong Thap and ends at Trung Luong – My Thuan expressway in Tien Giang.

The capital project will be financed by the State budget in the 2021-2025 period, the Ministry of Transport in 2026-2030 and the socio-economic recovery and development program approved by the National Assembly.

The preparation for the construction project will be carried out this year while the site clearance and resettlement will be implemented in 2022-2023. The project is expected to be kicked off in 2023 and completed in 2025.

The Cao Lanh- An Huu expressway project will contribute to the completion of the regional transport system and meeting the demand for transportation on the North of Tien River as well as connecting Dinh Ba International Border Gate in Dong Thap Province and sea ports and Dinh An economic zone in Tra Vinh Province.