Vietnam’s seafood exports to EU expected to continue to increase 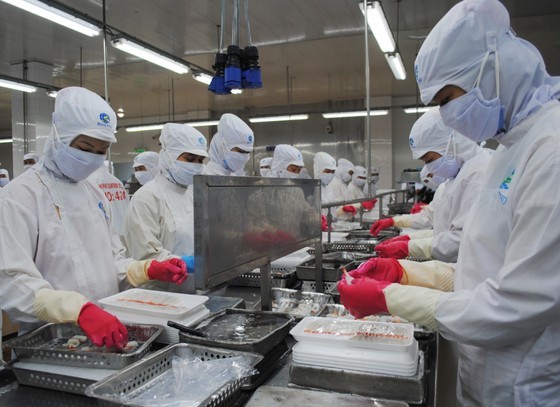 Workers in a firm process shrimp for export

At the eighth session of the People's Council in Ca Mau Province for the tenth tenure today, Chairman Huynh Quoc Viet said that shrimp processing and fertilizer production in 2022 will continue to be the bright spot of the province’s industry.

Export turnover was estimated at US41.3 billion, of which seafood, mainly shrimp, reached more than $1 billion, satisfying the province’s goal, up 5 percent over the same period. Fertilizer is estimated at $215 million, exceeding 275 percent of the plan with a 145 percent year-on-year increase.

According to Mr. Huynh Quoc Viet, the surge in export turnover is due to the effective exploitation of the export market as soon as countries gradually control the Covid-19 pandemic and take advantage of free trade agreements.

In related news, the People's Committee in the Mekong Delta Province of Soc Trang said that the province's export turnover in 2022 was estimated at more than $1.4 billion, an increase of 8.61 percent over the same period.

Accordingly, the export value of goods in Soc Trang province in 2022 reached $1.4 billion, exceeding 16.67 percent of the target and increasing by 8.61 percent over the same period.

This is also the second year in a row that Soc Trang province has exported seafood worth more than $1 billion.

Mr. Vo Van Chieu, Director of the Department of Industry and Trade of Soc Trang province said that the province could gain such achievement thanks to the provincial People's Committee’s direction in strengthening and promoting production and business activities right from the first months of 2022 and the drastic implementation of guidelines and policies to support enterprises to recover and develop production after the Covid-19 pandemic.