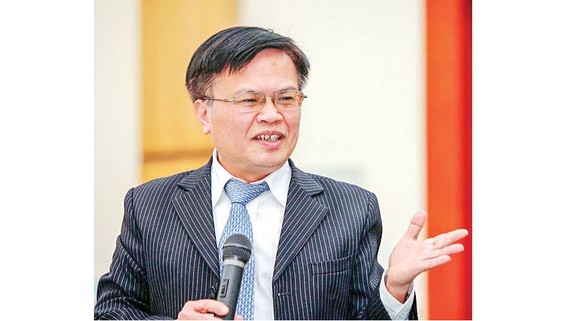 Journalist: - Sir, looking back at the development of enterprises, which includes the private enterprise sector, what are the milestones that point towards specific changes?

In 2013, for the first time, the term "entrepreneur" appeared in the Constitution. In 2014, the list of industries and professions prohibited from doing business, and conditional business lines were also specified more clearly and specifically. By 2017, the Party determined that building the private economy would gradually become an important driving force of the economy. Now there has been a leap in the right of businesses and individuals to do business. Up to now, the private economy has grown tremendously and has made great and important contributions to the country and is also an important driving force of the economy.

- Sir, entrepreneurs are an important force for a growing economy, but why are more than 90 percent of enterprises still SMEs?

- Despite the remarkable development, the private economic sector is only large in quantity and limited in quality. Research and development capacity and science and technology level, management methods, competitiveness, and capacity for international economic integration are still very limited. They are not taking advantage of opportunities from the open economy and free trade agreements. The reason is that there are still many barriers.

This is to say that the awareness and change of thinking about the role of the private sector are quite slow, and not reflecting the objective reality. Meanwhile, rapid change and development far exceed the framework of thinking, methods, tools, and capacity of state management which is still biased towards pre-checks and control. These factors create many risks in business and cause significant limitations to the development of the private economy in particular and the economy in general.

- Sir, does it mean when we say that the private sector is facing risks and challenges?

- First of all, it must be said that social awareness about the private sector and private enterprises is still biased and somewhat misleading. Many people consider private as becoming rich mainly from land, fraud, illegal business, and unfair competition. State management is still biased towards control, so there is a tendency to promulgate many regulations. Several mandatory bottleneck situations are pushing private enterprises into breaking the law when doing business, so they face too many institutional risks. The larger the enterprise, the more diversified the business, and the greater the risk.

In addition, there is also a communication risk combined with an institutional risk, causing great damage to the businesses involved. Damage can be to the point of turning a good business to the brink of bankruptcy. The above risks and uncertainties make private enterprises not want to grow further. Moreover, unequal access to resources is a consequence of the resource allocation mechanism which is even unable to access the necessary resources for investment and development. SMEs hardly have access to credit for investment as well as access to land use rights.

Tools and policies to support SMEs are almost ineffective. The limitations of capital, technology level, and management capacity have prevented many processing enterprises from breaking the ceiling and reaching a higher development ladder or opening up new growth potential. The above factors make businesses that want to become big feel the frustration in further growth. Therefore, developing a healthy private economy under the market mechanism is an objective requirement, both urgent and long-term, and an important means to liberate production power and effectively use development resources.

- Sir, what more needs to be done to have a strong force of Vietnamese businesses and entrepreneurs?

- In my opinion, it is necessary to encourage and create favorable conditions for the private economy to develop quickly, sustainably, and diversify with high growth rates in terms of quantity, size, quality, and contribution to the GDP. At the same time, it is necessary to remove all barriers and prejudices and create all favorable conditions for the development of a healthy and properly oriented private economy in all sectors and areas not prohibited by law. The State needs to promote start-ups and new innovations and also improve the operational efficiency of SMEs. This can be done by creating a favorable environment and conditions for business households to voluntarily associate to form cooperative organizations or operate under the enterprise model.

It is necessary to remove the institutional bottlenecks that make private enterprises fear to grow bigger. We have to untie the knot that is holding back private enterprises that want to grow but can't grow. At the same time, we must encourage the formation of multi-owned and private sector economic groups to contribute capital to state-owned economic groups that are capable of participating in regional and global production networks and value chains. The private sector must be encouraged to contribute capital and purchase shares of SOEs upon equitization or divestment by the State.