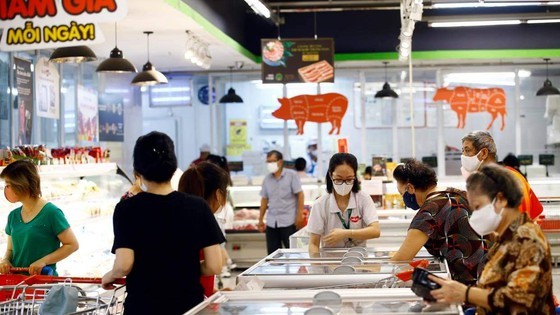 Vissan will temporarily stop supplying pork to some supermarkets
However, from now until August 1, Vissan will just supply 300 pigs a day and 500 pigs a day in the next day. It is expected that the company will supply the same amount of goods as before after August 5.

In the immediate future, domestic meat processor Vissan will focus on supplying fresh meat to its chain of stores and temporarily stops supplying pork to some supermarkets due to a temporary shortage of output.
On the evening of July 27 and early morning of July 28, Vissan slaughtered more than 720 pigs. However, the company has announced a temporary halt of the supply of blistered pork.
According to General Director An, the company detected several cases of Covid-19 leading to the pause of several operations of the company. However, the company will make effort to supply pork to the city’s market.
According to the Vissan leader, the implementation of " three on-site" as per the city request has been carried out at the end of June 2021. From July 19 to July 27, through testing, healthcare workers detected 43 cases of Covid-19 in the company.
The company promptly brought infection cases into isolation camps in Binh Thanh District as well as conducted screening and temporarily blocked areas with suspected cases, following the guidance of the Center for Disease Control of Ho Chi Minh City.
Regarding Vissan's temporary reduction in supply, Deputy Director of Ho Chi Minh City Department of Industry and Trade Nguyen Nguyen Phuong said that there will be overall no big impact because the supply from localities is very abundant. Currently, Vissan is supplying 600-700 pigs per day, equivalent to 10 percent of the total supply of the southern metropolis.
Ho Chi Minh City Union of Trade Cooperatives (Saigon Co.op) July 28 said that commodities in more than 250 supermarkets Co.opmart, Co.opXtra, Co.op Food, Co.op Smile, Finelife, HTVCo.op in HCMC is relatively enough for the city dwellers' demand. This retailer is planning to increase the supply of essential goods to residential areas, blocked and isolation areas.
In addition to the current forms of goods supply, Saigon Co.op also proposed a plan to coordinate in implementing joint orders to supply essential goods for residential, blocked, and isolation areas. Saigon Co.op has sent a list of more than 100 items to many areas citywide.