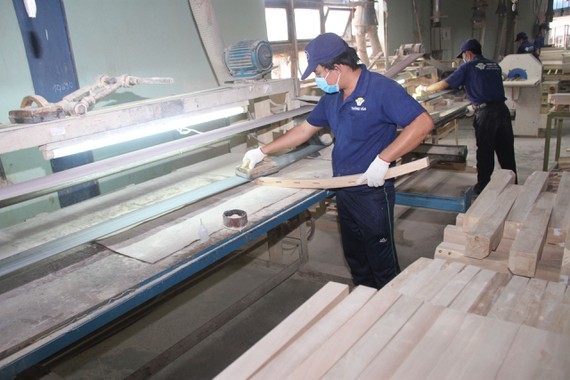 The wood industry maintains growth momentum despite Covid-19
According to Binh Duong Furniture Association (BIFA), in the first 8 months of 2021, the export turnover of wood products was estimated at nearly US$4.78 billion, up 44.2 percent over the same period last year; accounting for 21.5 percent of the province's export turnover with the key markets such as Japan, Singapore, Hong Kong, Taiwan (China), the European Union (EU), especially the US market accounting for more than 65 percent.
Many years ago, businesses in the region did conquer the US market having stable orders and large output. A leader of Tan Nhat Company in Nam Tan Uyen Industrial Park said that the company received most orders of tables, chairs, cabinets, and other interior products.
About 600 wood exporters in the Southern Province of Binh Duong are currently promoting the restructuring of production with a focus on high-value products plus changes in the trade promotion method from direct to online through e-commerce channels such as Amazon, Alibaba; thereby, more new customers have known the exporters placing orders until the end of 2021.
The wood industry of Dong Nai Province reached an export turnover of more than $1.3 billion in the first seven months, an increase of 7.72 percent against the same period in the region, ranking the second among the province's five main export products, significantly contributing to the growth of the province's overall export turnover.
Vu Trong Manh, owner of a famous wood business in Dong Nai Province’s Bien Hoa City said that the company specializes in manufacturing furniture and cabinets for export to the US market. Since the beginning of the year, the company has seen stable output and orders and received orders until the third quarter of 2021. He concluded that the wood export market this year has been brighter than the previous year because many businesses have shifted orders from China to Vietnam.
According to BIFA leaders, the export value of wood products could obtain such achievement because, from the second half of 2020, Vietnam has relatively controlled the Covid-19 epidemic, businesses in the industry have promoted production after receiving many orders at that time. The US-China trade war caused many large enterprises in the world shift production and orders to Vietnam.
In the meantime, many other businesses have also changed trade promotion methods from direct to online and have received export contracts until the end of 2021.
Noticeably, since the EU-Vietnam Free Trade Agreement (EVFTA) officially took effect, the wood industry has expanded its market to EU countries. According to the Vietnam Timber and Forest Products Association (VIFORES), the country's wood export value will still reach US$15-15.5 billion as per the set goal if the epidemic situation in the last months of the year is controlled.
However, the complicated development of the Covid-19 epidemic and prolonged social distancing mandates also make it difficult for long-term growth to be maintained. According to the leader of Minh Phat 2 Wood Company, one of the largest wood processing enterprises in Binh Duong Province, most of the exported products are those in the company’s warehouses.
Chairman of BIFA Dien Quang Hiep said that Binh Duong Province’s wood industry growth is potential; therefore, he believed that the province can achieve the goal of exports provided that employees in the sectors received enough two vaccine jabs.
Subsequently, BIFA has petitioned to be prioritized in vaccine distribution as well as supports in policy, capital, and tariff to build a specific industrial park for the wood industry so that its enterprises can assist each other to ensure production assembly lines for global competition.