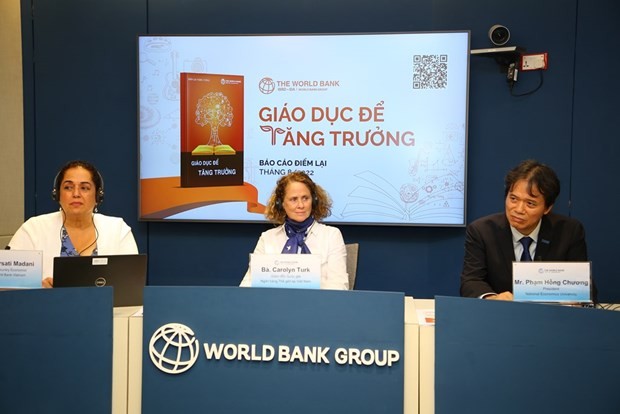 At the press conference to release the report. (Photo: WB Vietnam)
According to the latest economic update by World Bank (WB) for Vietnam, the country’s economy expanded 5.2 percent in Q4 of 2021, and respectively 5.1 percent and 7.7 percent in Q1 and Q2 of 2022. Inflation is projected to average 3.8 percent over the year.
Carolyn Turk, WB Country Director for Vietnam, said that the bi-annual report “lays out a set of policy recommendations that could help mitigate the impact of these risks and make the economy more resilient going forward.”
Titled “Taking Stock: Educate to Grow”, this edition underlines transforming the higher education system as the key to boosting the country’s productivity and achieving its development goals, in the context where the country re-emerges from the pandemic and into a challenging global environment.
The report’s co-author Dorsati Madani said that while Vietnam’s economic recovery had been relatively stable, not all sectors witnessed the same situation.
The impact on workers and households during the crisis was serious and lasting, with about 45% claiming lower incomes in December 2021 than the previous year.
The impact of the pandemic is still present with businesses reporting broad-based labor shortages as of March 2022, which were felt more acutely in services and manufacturing, and in the Ho Chi Minh City area.
This, in addition to growth slowdown or stagflation in main export markets, further commodity price shocks, continued disruption of global supply chains, or the emergence of new Covid-19 variants, are hindering Vietnam’s full recovery.
Statistics revealed that Vietnam’s population has an average 10.2 years of schooling, second only to Singapore among the Association of Southeast Asian Nations (ASEAN) countries.
Vietnam’s human capital index is 0.69 out of a maximum of 1, the highest among lower middle-income economies.
However, low skills relevance of the university graduates put the country in the bottom third of the 140 countries listed in the 2018 Competitiveness Index on skills relevance of university graduates.
A World Bank skills and enterprise survey published in 2019 also said that 73 percent of sampled Vietnamese firms report difficulties in recruiting employees with leadership and managerial skills, 54 percent with socio-emotional skills, and 68 percent with job-specific technical skills.
Focusing on tertiary and higher education, the WB’s report recommends reforming the education system to improve quality and access, and thus provide the necessary skills to the population.
Reforms to Vietnam’s higher education system could help support development objectives, the report says.
The increasing financial costs of pursuing higher education and the perception of diminishing economic returns from pursuing higher education have weakened demand.
While efforts to enhance the business environment are crucial to enabling job creation, policymakers should also take steps to reduce skill-mismatches and improve the quality of Vietnam’s labor force.
Turk said: “To sustain economic growth at the desired rate, Vietnam needs to increase productivity by 2-3 percent every year.
“International experiences have shown that higher worker productivity can be achieved by investing in the education system, as an important part of a basket of investments and reforms. A competitive workforce will generate much-needed efficiency for Vietnam in the long term.”