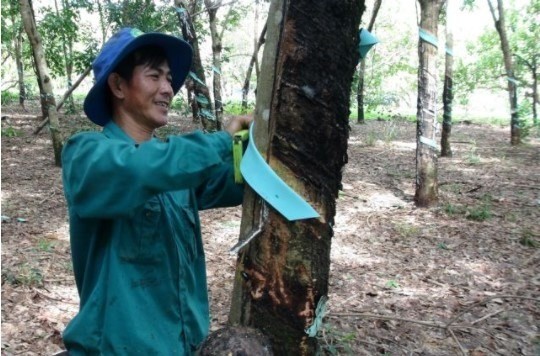 A farmer preparing to collect latex in a rubber plantation in Binh Phuoc province (Photo: VNA)
In its second quarter results, Dong Phu Rubber JSC (DORUCO, DPR) posted a rise of 11 per cent in net revenue to VND218 billion  (US$9.5 million).
During the period, its consumption reached 2,431 tonnes, up 35 percent, with the average selling price at VND45.9 million per ton, up 50 percent year-on-year. As a result, the company’s profit after tax rose 41 percent over the same period last year to over VND34.77 billion.
In the first six months of the year, DORUCO recorded net revenue of VND419.6 billion and profit after tax of VND86.3 billion, up 41 percent and 66 percent, respectively.
The positive business results helped boost DPR shares on the Ho Chi Minh Stock Exchange (HoSE). The company's shares were traded at VND60,400 on July 27, up 35.7 percent compared to early April.
Similarly, Daklak Rubber JSC (DAKRUCO, DRG) witnessed net profit of more than VND32 billion in the second quarter due to higher rubber prices, while it lost VND26 billion in the same period last year.
In the first half of 2021, the rubber producer posted a net profit of nearly VND58 billion, while it had a net loss of nearly VND20 billion last year.
DRG shares are listed on UPCOM and traded at VND14,600 per share, up 19.7 percent compared to the beginning of the year.
Tan Bien Rubber JSC (TABIRUCO, RTB)’s profit also jumped in the second quarter.
Accordingly, in its consolidated results, TABIRUCO reported profit after tax of more than VND84.1 billion, up 99.3 percent year-on-year. In the first six months of the year, the company’s profit after tax reached VND120.6 billion, 3.8 times higher than the same period in 2020.
RTB shares, which are also listed on UPCOM, rose by nearly 22.7 percent compared to the beginning of the year to VND11,900 on July 27.
The Agency of Foreign Trade, under the Ministry of Industry and Trade, estimates that in the first six months of 2021, rubber exports will reach about 681,000 tons, worth US$1.15 billion, up 41.3 percent in volume and 79.9 percent in value compared to the same period last year.
Meanwhile, according to estimates from the Association of Natural Rubber Producing Countries (ANRPC), global rubber production in the first quarter of 2021 has dropped by 12.5 percent year-on-year, but rubber consumption has climbed 15.7 percent in the second quarter.
Total rubber consumption has recovered from the bottom as world economies, especially China, suffered from the outbreak of Covid-19 since the beginning of 2020.
Total global rubber production in the first half of 2021 reached 4.5 million tons, while total consumption was about 5.4 million tons. Therefore, the supplies are short by more than 800,000 tons.
The decline in total rubber production started since 2020, but the supply-demand gap widened in 2021.
Analysts from ACB Securities Ltd. (ACBS) said that some reports show that farmers neglected their rubber plantations due to falling prices over a long period of time, meaning plants were easily exposed to diseases.
About 65 percent of natural rubber is produced in Southeast Asia. However, at present, some countries in this region such as Thailand and Malaysia have rubber trees that are hit hard by disease.
Countries such as Sri Lanka and India also have large areas of rubber trees affected by disease.
Faced with this situation, the Vietnam Rubber Association has issued a warning to its members to be better prepared if the disease spreads to the country, especially for members with rubber plantations in Cambodia, which is geographically close to Thailand.
In fact, the development of rubber growing areas has been under pressure when rubber prices entered a bear market during 2013 - 2019.
In Indonesia, new industrial crop areas are dominated by oil palm trees, which have a shorter harvest time than rubber. There was a time when Thailand encouraged farmers to replace rubber trees with other crops due to prolonged low prices.
“The rubber market is experiencing a shortage of supplies in the first half of 2021. The tight supplies will continue through 2021 when the rainy season has started,” ACBS said.
Moreover, with the high correlation between the price of natural rubber and the price of Brent oil and butadiene, a raw material for synthetic rubber production, rubber prices may rise again as oil prices have remained high since the beginning of the year.
While ACBS believes that the second wave of Covid-19 in India, one of the largest rubber exporter in the world, since March will prevent rubber demand from growing too much in 2021, it expects rubber prices to surge 44 percent this year.
This will have a positive impact on rubber producers, offsetting the decrease in output.