Speaking with Saigon Investment, Ms. PHAM CHI LAN, an economic expert, says that this has discouraged many foreign retailers who have begun to gradually withdraw from the Vietnamese retail market (VRM) because of unsustainable profits.

JOURNALIST: - Ma’am, several foreign retailers (FRs) have begun to withdraw from the Vietnamese market in last few years, and some others are reconsidering their plans for the near future in Vietnam. Why is this the case when VRM has been considered appealing with still a lot of room for growth?

Ms. PHAM CHI LAN: - It is essential to get to the root of the problem to understand the cause of FRs withdrawal from the Vietnamese retail market. Several FRs have said that VRM is still growing, but the growth is considerably insubstantial and has failed to meet their expectations.

The impact of the Covid-19 pandemic on the Vietnamese economy in 2020 was quite serious. Although Vietnam's economic growth rate is said to be high, this growth rate is basically temporary, and generally unstable and unsustainable, and the economy's resilience to external shocks is relatively insufficient. Foreign investors believe that Vietnam's economy is growing because of its accumulated achievements over the last few years, but these accumulated resources are running short this year, making it extremely difficult for Vietnam to maintain a positive growth rate. Furthermore, FRs weigh the possible growth of the economy in general and VRM in particular in the years to come. When all the necessary factors are put into consideration, it is obvious that the growth of the current VRM is unlikely to meet their expectations.

- Ma’am, what do you think about purchasing power of VRM compared with that of some other countries in the region?

Vietnam is currently highly valued for its economic growth rate, but its consumer market is not. This aspect of Vietnam, foreign investors know well. They do business and sell products in the market, so they certainly understand this better, rather than based on figures in reports by our government agencies. They just look at their sales and profits. They are companies, so they must ponder real numbers and actual reflections of the market, rather than just economic growth rate figures.

- Ma’am, some people suppose that input costs in VRM are a burden for businesses, and this has also caused foreign investors to withdraw. What is your opinion on this?

- Costs are huge hurdles for both domestic and international retailers in Vietnam. Costs of investment in retail in Vietnam are not low, especially the costs of outlet leasing. Retail outlets are usually in the downtown area in big cities and leasing prices are always high. The real estate fever in Vietnam in the last couple of years has also raised the outlet leasing costs. 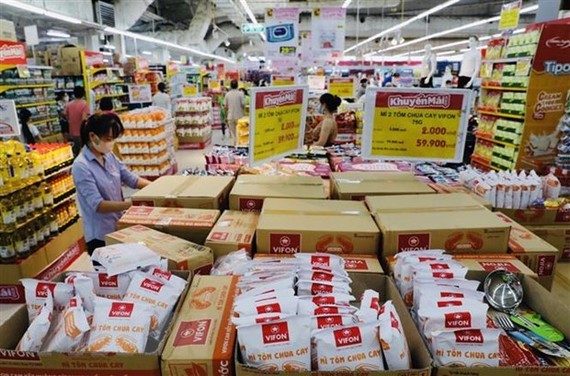 Additionally, another cause has been the rapid growth of e-commerce in Vietnam in recent years. Take 2020 for instance, when the effects of the Covid-19 pandemic clearly showed a growing trend towards e-commerce. In the future, big consumers and middle-income people will mainly make their purchases online, particularly because they have a good opportunity to use modern technology and convenient payment method. In such case, retail companies are very unlikely to expand their business due to high costs of outlet leasing while their market shares shrink as consumers switch to e-commerce.

- Ma’am, what do you predict will happen to VRM in coming years?

- In the next few years, there will still be intense competition in VRM. That is to say, competition among retail businesses and between retail businesses and e-commerce to increase their market shares. It is obvious that large retail chains of Japanese, South Korean and Thai giants still enjoy stable growth rates. They are very likely to sell their products easily, so they continue to expand their supply chains in the Vietnamese market. Corporations from these countries are still confident in their ability to positively maintain their retail chains and sales. This is evident because Vietnamese consumers have long trusted in the products of such foreign businesses.

In fact, Vietnamese people have long had confidence in products from Japan and South Korea while Vietnamese consumers choose Thai products because they are basically of better quality and design than Vietnamese products. Moreover, Thai investors show how clever they are by pouring their investments in consumer goods, which is comparatively less risky and makes it easier for them to see returns on their capital.

Take beverages for example. After acquiring Sabeco, the Thai investor made substantial improvements in administration and services, significantly reducing the input costs and making higher profits. Similarly, they bought Vinamilk shares and have also greatly benefited from it. By acquiring Vietnamese company shares with high commercial value, they are able to dominate the market. When these giants are strong in VRM, investors from Europe will find it very hard to compete with them.