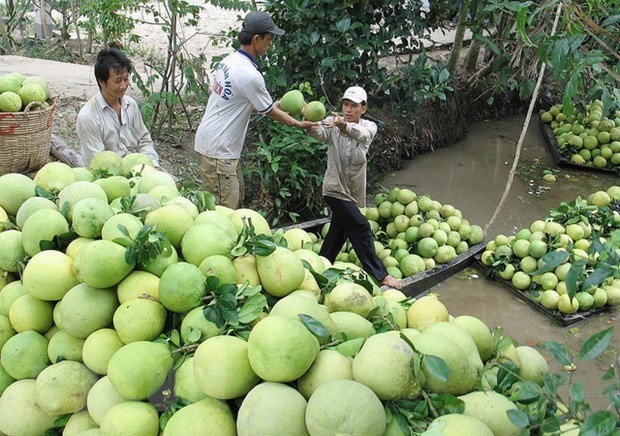 Vietnamese pomelo has opportunity to expand exports to many demanding markets. (Photo: VNA)

Nguyen Thi Thu Thuy, Deputy Director of the Export Promotion Centre, said that Vietnamese pomelo is considered to have superior quality to other countries thanks to its moderate sweetness and suitability to consumers of many regions and markets together with a low pest risk.
As pomelo has thick skin, it is easy to preserve for a long time after harvest, which makes it possible to transport by sea, according to the official.
Besides, agricultural products and pomelo in particular are subject to preferential tariffs under free trade agreements to which Vietnam is a member, hence the large potential for pomelo export to many markets.
Thuy pointed out that currently, Vietnamese pomelo is mainly exported in the form of fresh fruit with low added value. Pomelo can be processed into many different products such as fruit juice, essential oil and jam while the essence in pomelo peel could be used to produce many types of pharmaceuticals and foodstuffs.
The trade official said the US has allowed the official import of green-skinned pomelo from Vietnam, which is the seventh fresh fruit of Vietnam to receive permission to enter this market, after mango, longan, lychee, dragon fruit, rambutan and star apple.
Other goods such as coconut and durian have already been exported to the US but in frozen form.
After pomelo, the US is considering procedures to allow the import of Vietnamese coconuts.
Thuy cited statistics from the US Department of Agriculture that the US has huge demand for fruits, estimated at around 12 million tons per year while the US’ domestic production of fresh fruit met only about 70 percent of the demand. This is a big opportunity for Vietnamese fruits, including pomelo, she said.
According to Nguyen Manh Quyen, head of the Vietnam Trade Office’s branch in Houston, Texas, Vietnam’s export of fresh pomelo to the US remains modest.
Statistics showed that the US imported around US$17 billion  worth of pomelo in 2020 and $20 billion in 2021. In the first seven months of this year, the US’ pomelo import reached $14 billion , of which Vietnam accounted for around $1 billion.
Quyen urged enterprises to pay attention to strictly comply with the guidance of the US Department of Agriculture and the US Food and Drug Administration when exporting fruit to the US.
Vietnamese pomelo also has the opportunity to expand in Indonesia and Hong Kong.
Vu Thi Thuy, from the trade office in Hong Kong, said that Hong Kong has high demand for fresh pomelo, spending $36.4 million to import pomelo last year, an year-on-year increase of 28.2 percent. Vietnam ranked second in exporting pomelo to Hong Kong with export revenue of $2.5 million , after Thailand with $ 7.8 million in 2021.
However, in the first seven months of this year, Vietnam’s export of pomelo to Hong Kong increased 133 percent against the same period last year to reach $2.53 million, becoming the largest pomelo exporter to Hong Kong.