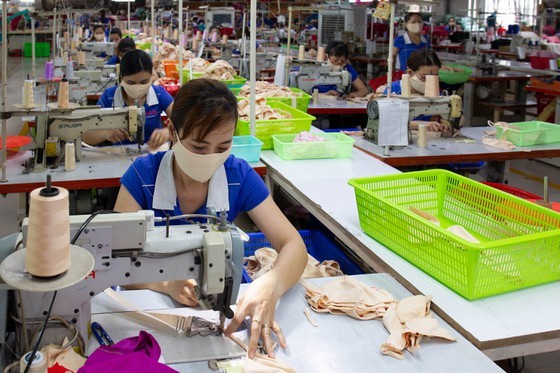 Textile is one of the key export products of Vietnam (Photo: SGGP)
Representative of Villalobos Modas Company (Brazil) Sergio Arevalo said that South America in general and especially Brazil, in particular, is a potential market for exporting textiles, footwear, and handbags from Vietnam.
For instance, Brazil - the largest consumer market with a population of up to 200 million people, on average, each year imports more than US$236 billion value of goods and 30 percent of which comes from Asia including Vietnam.
According to the statistics of the General Department of Vietnam Customs, three groups of most exports to the Brazilian market since the beginning of the year include footwear of all kinds with $33.18 million, textiles reaching $12.73 million, and bags, wallets, suitcases, hats, umbrellas achieving $3.33 million.
Unlike Brazil and South America in general, the Indian market is considered to be a very potential one for tea and coffee exporters. Mr. Bui Trung Thuong, Counselor of the Vietnam Trade Office in India, said that for the first time, in 2021, the bilateral trade between Vietnam and India exceeded $13 billion, an increase of 36.5 percent compared to 2020.
Particularly from the beginning of 2022 until now, Vietnam's export turnover to India increased by 12.6 percent over the same period last year. Tea and coffee, especially instant coffee products, are popular products in this market with a population of 1.4 billion.
Currently, the purchase of these two products from Vietnam is being sought by many Indian businesses. Only from the beginning of the year until now, hundreds of Indian enterprises through the Ministry of Industry and Trade’s promotion programs have come to Vietnam to find out market information to buy a product for processing, domestic consumption, and export.
Not only that, Vietnamese coffee enterprises also have the opportunity to boost exports when the demand for this product increases sharply in the Chinese market. Mr. Truong Te Dong, Chairman of Sichuan Beverage Association, and Mr. Yu Cuong, Deputy Director of the Commercial Department in China’s Sichuan Province informed that despite the impacts of the Covid-19 pandemic, China maintains its demand for coffee.
According to the China Coffee Association, coffee consumption in the country is growing at an average annual rate of 15 percent. Currently, 60 Chinese enterprises came to Vietnam to look for coffee export partners in May.
As for traditional export markets like Europe, seafood will be the dominant product. Nguyen Thi Thu Thuy, Deputy Director of the Export Support Center under the Ministry of Industry and Trade, said that since the Vietnam - EU Free Trade Agreement (EVFTA) officially have taken effect from August 2020, about 220 tax lines for aquatic products are existing with a base tax rate of zero percent to 22 percent. The remaining tax lines will be reduced to zero according to the 3-7 year road map. As a result, Vietnamese seafood increases its price competitiveness compared to similar products in other countries.
Currently, the five largest seafood export markets of Vietnam in the EU include the Netherlands, Germany, Belgium, Italy, and France accounting for 72 percent. Exports of all major products to the EU grew in double digits. Notably, the export of shellfish to the EU market increased sharply by 37 percent, reaching $87 million. Most surprisingly, clam products have become the fourth largest export value seafood to the EU market.
Vietnam's cashew, textile, and wood industries have gradually moved up to the top position in the world's exports. In particular, in some markets, Vietnam's exports have surpassed China - which is considered a country with great resources, and is difficult to compete in terms of quantity of orders as well as product prices.
Explaining this issue, the Textile and Garment Association said that the US has put Vietnam at the top of the textile and garment exporting countries to this market because Vietnamese enterprises have taken the initiative to transform production very early. Five years ago, right after the world fashion market moved towards the greening trend, Vietnamese textile and garment enterprises transformed their entire production technology.
Specifically, Vietnamese enterprises have prioritized importing or producing environmentally friendly fabrics. Next, their entire production line has been improved because they poured more money into technology in the effort to reduce the use of fossil energy, the amount of waste generated must also be treated and recycled.
On that basis, the association quickly shook hands with environmental organizations and global environmental protection funds to seek financial support to transition to green production. And as a result, since then, garment exporters that are members of the association have confidently maintained and expanded their market share to the US as well as many other countries.
Similarly, the Wood Processing Association said that at the time when export markets only received wood products processed from planted forests, many domestic enterprises couldn’t continue export to other countries because they did not meet barriers. However, businesses have joined hands with farms, cooperatives, and farmer households to increase the area of planted forests very quickly. Subsequently, after only five years, Vietnam has risen to the top of exporting countries of wood and wood products to the United States and Europe.
Regarding the exports of honey products, only two years after entering the export market, this Vietnamese honey has taken the first position in the world. In the US and European markets, it is very difficult for any domestic honey product to compete. However, when Vietnam's honey products were taxed more than 400 percent by the US, the market was almost completely closed.
Despite that, many businesses have not been given up but joined forces with the Ministry of Industry and Trade to fight against the unreasonable tax rates that the countries have been applying. As a result, the export tax rate of this item in the United States has been reduced from 400 percent to 60 percent so far. Though the tax rate is still high, it has also paved the way for this product to return to the US market.