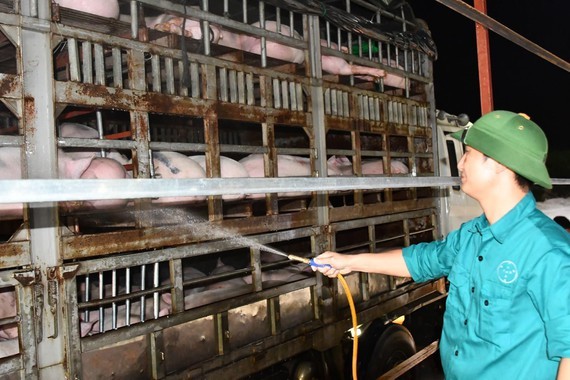 A truck carrying live pigs imported from Thailand through Lao Bao Border Gate is being sprayed disinfection. (Photo: MARD)
This morning, the Ministry of Agriculture and Rural Development (MARD) issued Official Letter No.3157 to the Thai Embassy in Hanoi on suspending the import of live pigs for slaughter for food from Thailand into Vietnam. The official letter signed by Deputy Minister Phung Duc Tien stated that according to the announcement of the animal quarantine agency under the Department of Animal Health of Vietnam, on May 19, this year, during the quarantine process of imported live pigs, including 980 live pigs imported from Thailand into Vietnam for slaughter for food, this agency discovered that this batch of live pigs was infected with ASF.

To prevent ASF from entering Vietnam and spreading the disease to domestic pig herds, the MARD has informed the Thai Embassy in Hanoi that Vietnam will temporarily halt imports of live pigs for slaughter from Thailand from June 30, 2021.

As for batches of live pigs that have been signed by enterprises of the two countries and will be transported to Vietnam until the end of June 29, this year, the MARD will allow the import of them into Vietnam and direct the veterinary agency to strictly control to prevent the ASF epidemic and ensure food hygiene and safety. 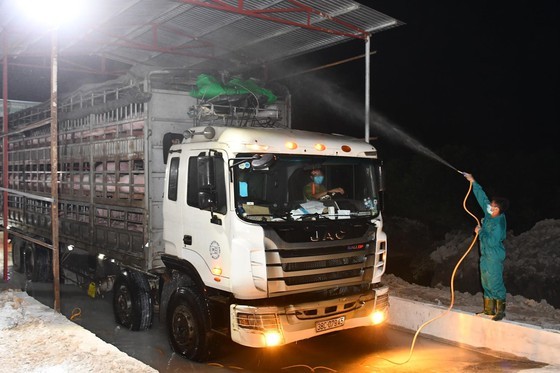 A truck carrying live pigs imported from Thailand through Lao Bao Border Gate is being sprayed disinfection. (Photo: MARD)
The MARD entrusted the Department of Animal Health to coordinate with the competent authorities of Thailand to assess the disease situation of the pig herds raised for slaughter for food of Thailand and consider allowing to resume the import when the conditions of safety are guaranteed.

The prices of live pigs decline as supply increases

The leader of the Department of Animal Husbandry and Veterinary of Dong Nai Province, on May 27, said that within the past half month, the prices of live hogs have continuously cooled down. The prices of live hogs sold at farms range from VND63,000 to VND68,500 per kg, down VND3,000-VND5,000 per kg compared to those at the beginning of the month and VND27,000 compared to the highest price of live hogs in the history of VND94,000-VND96,000 per kg in the previous year.

Specifically, the current prices of live pigs of CP Vietnam Livestock Joint Stock Company located in Bien Hoa 2 Industrial Park are VND68,500 per kg for 3M porkers and 2M sows and VND63,000 per kg for 2M boars. These price levels have declined by VND3,000 per kg compared to those at the beginning of the month. Since the beginning of May, the company has reduced the prices of live pigs three times, cutting VND1,000 per kg each time.

According to the Department of Animal Husbandry and Veterinary of Dong Nai Province, the prices of live pigs have dropped because the market consumes sluggishly due to the impact of the Covid-19 pandemic, and the supply increases as farmers have gradually recovered their pig herds. By the end of April this year, the total pig herd in the province of Dong Nai reached about 2.4 million heads, an increase of about 600,000 heads over the same period. Noticeably, although the prices of live pigs have slid slightly, pork prices have not tended to decrease. Specifically, the prices of pork at some markets in Bien Hoa City on May 27 were VND160,000 per kg for pork belly and VND170,000 per kg for ribs, same as those at the beginning of the month.