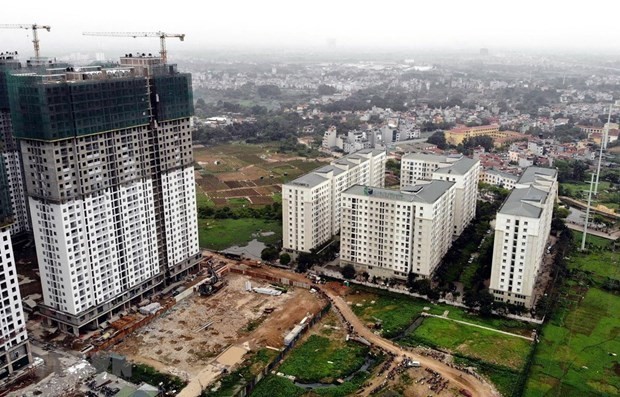 Vietnam has more than 5.1 million sq.m of built social housing, accounting for only about 41.4 percent of the country's target by 2020 (Photo: VNA)

According to the statistics, the total area of more than 5.1 million sq.m of built social housing accounted for only 41.4 percent of the target of 12.5 million sq.m of proposed housing in the National Housing Development Strategy by 2020.
According to realty insiders, the supply of low-priced apartments was still very scarce. The affordable segment, which was more expensive than the low-income segment, was also not easy to find while the need to improve the accommodation for people with limited income was growing.
The MoC said since 2016 there have been about 1,040 projects to build social housing for low-income people in urban areas and industrial park workers, including 507 independent housing projects and 533 social housing projects built on 20 percent of the land fund of commercial housing and urban development projects.
Up to now, only 248 projects have been completed with a construction scale of more than 103,500 apartments in a total area of more than 5.1 million sq.m. Another 264 projects with a construction scale of about 216,500 apartments and total area of about 10.8 million sq.m were being built.
While the segment of low-priced apartments dominated in terms of total number of transactions on the market, the supply will not be further improved until the end of 2022.
A representative of the MoC said: “The tightening of administrative procedures in project construction and development limited the new supply of real estate projects.”
The MoC’s latest report on the real estate market showed that affordable apartments are priced below VND25 million per sq.m in big cities while prices for each sq.m of a low-income house far from the centre was below VND25 million.
The report also said as there was little supply of low-income houses, the prices increased from less than VND20 million to less than VND25 million per sq.m.
Professor Dang Hung Vo told local media: “The State's affordable housing developers can only meet 15 percent of the housing supply for immigrants and the rest of them have to take care of themselves.”
Vo added: “These people are in need of cheap commercial housing, ranging from VND700 million to VND1 billion each.”
He calculated the supply of cheap houses was nowhere near the demand.
Due to the lack of supply, according to most insiders, social housing has never experienced a crisis in transactions and the liquidity was always the most stable in the market.
The latest data and reports from realty research firm Savills Vietnam said household size in HCM City has tended to decrease over the past ten years. The household size was 3.5 people per household in 2019, much lower than the rate of 3.9 people per household in 2009.
The firm also said 66 percent of households have from two to four members, and there is a trend of separating households, which led to an increase in housing demand.
According to Savills Vietnam, the number of apartments offered for sale on the market with a value of VND2 billion each or less accounted for about 10 percent of the total number.
Many investors and developers are following the trend of reducing the area to fit the needs of small families and make the value suitable for buyers. However, the number of apartments of less than VND2 billion, from 50 to 60sq.m, was not many.
Vo Thi Khanh Trang, deputy director of Savills Research Department in Ho Chi Minh City, said as the land fund was limited and the price of construction materials was increasing, the prices of houses would increase.
Trang said in order to increase the supply for the low-price and affordable housing segment, "it is necessary to have co-operation from local authorities with policies to support businesses to quickly solve administrative procedures and businesses which build such projects."
On April 15, the MoC representatives met with Korean housing experts in HCM City to share experience in social housing development of the Republic of Korea (RoK) as part of a project on the building of a master policy on Vietnam's social housing development for the 2021-30 period, carried out using non-refundable official development assistance (ODA) from the RoK government via the Korea International Cooperation Agency (KOICA).
Director of Korea Housing and Land Research Institute (LHI) Moon Hyogon said in the current economic growth context, relying on government support alone cannot provide enough housing to meet people's needs, especially in the low-income segments.
Moon Hyogon said using money from the private sector in housing provision should be a solution, saying: “As more Vietnamese businesses can earn profits from low-income household building, they should put a certain amount of the revenues to increase development funds for developing low-income housing.”
The Korean expert said the formation of such a fund was expected to carry out the unified, systematic management of many aspects including financial resources, thereby achieving successful results for Vietnam.