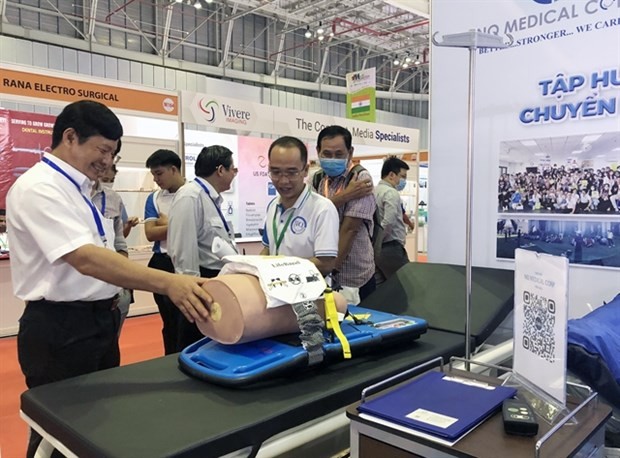 Visitors to the 20th International Medical, Hospital & Pharmaceutical Exhibition that opened on August 11 in HCMC. (Photo: VNA)
The market is now worth US$1.5 billion, up from $1.1 billion in 2017, Hua Phu Doan, deputy chairman of the association, said.

Domestic medical devices manufacturers make mostly basic stuff and meet only 10 percent of demand while the remaining 90 percent is imported, he told a meeting held recently in HCMC.

The number of foreign manufacturers in Vietnam remains modest due to the lack of development of supporting industries and the absence of an industrial cluster in this sector, he said.

In Doan's opinion, foreign investment in the production of medical devices is vital to reduce reliance on imports and facilitate development of supporting industries serving the healthcare sector.

The 20th International Medical, Hospital & Pharmaceutical Exhibition, which opened in HCMC on August 11, serves as a platform for foreign businesses to explore partnerships and investments in Vietnam, he said at the inaugural ceremony.

Vietnam Medi-pharm Expo 2022, with its larger scale and exhibitor portfolio, is also a great opportunity for local businesses to access advanced technologies and specialized equipment in the pharmaceutical and medical device sectors, Doan added.

The expo brought together 260 exhibitors from 20 countries and territories, with businesses making pharmaceuticals and functional foods accounting for half of them.

The expo at the Saigon Exhibition and Convention Center, organized by Vinexad JSC in collaboration with the association, wrapped up on August 13.