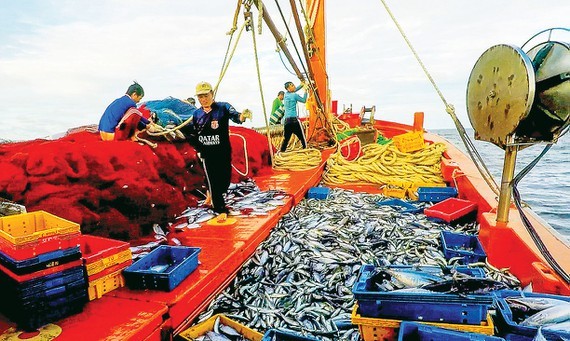 As Ship No.BD-96768TS is replenishing its necessary items and fuel at Quy Nhon fishing port, its owner Ly Van Vang briefly informed that in the upcoming trip, his ship has 13 fishermen, using modern equipment to catch striped bonito along Truong Sa archipelago (in Khanh Hoa Province). After such a trip, his ship can catch 20-40 tonne of fish and earn around VND400-750 million (approx. US$17,500-33,000).

Equipment upgrades have obviously saved much time and effort of Vietnamese fishermen while helping them earn more money. “In addition to modern tools, we go in groups of 5-15 ships. When an ideal fishing spot is identified, small ships anchor there to operate for 2 months while larger fishing vessels bring products to the mainland, then take essential commodities back to the fishing site. This method can increase 50 percent of the performance and reduce unnecessary ship movement, thus minimizing violation of international laws”, explained Mr. Vang.

Similarly, Binh Thuan Province maintains 129 fishermen teams with 982 ships and 5 fisheries unions with 68 ships. This trend aims at a more sustainable development for people in the field as they are more closely connected and more responsible. 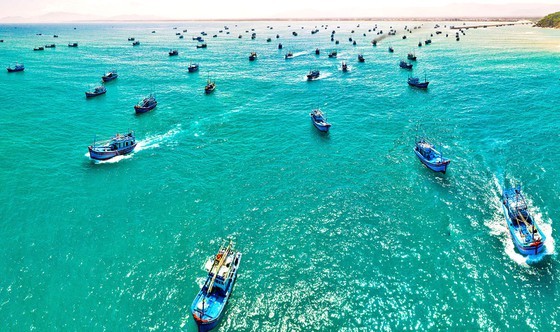 Sharing the same aim is Hoai Nhon Town in Binh Dinh Province, the capital of tuna fishing in the Central region of Vietnam. The town has over 2,300 fishing ships, 90 percent of which are offshore ones to catch tuna. In 2020, its seafood catching output reached 59,000 tonne, earning over VND1,000 billion ($43.9 million).

15 years ago when people in the Central region attempted offshore fishing, fishermen of Hoai Nhon Town gathered in groups or unions for this task. Until now, the main union of the town has about 1,100 member ships always cooperating in work and following international laws strictly to avoid IUU fishing.

As the natural seafood resources are depleting, fishing outputs are witnessing unavoidable falls. That urges the implementation of measures to regenerate seafood for more sustainable exploitation.

The Fishery Sub-Department of Ca Mau Province has released 500 cube-shaped artificial reefs at its western coastal area, 14km away from Da Bac Island to be new homes to attract more fish here. This proves especially practical since large fish begin to appear more, signaling that the natural food chain has been positively recovered.

Managers of these special homes at present are fishermen living in the neighborhood. The good news is illegal fishing ships dare not perform their work near these areas because their equipment might be damaged by the concrete artificial reefs and they might get caught by local fishermen on monitoring duty.

Head of Ca Mau Province Fishery Sub-Department Do Chi Si informed that the construction of these artificial reefs is to foster natural seafood resources. This project will soon be evaluated before being considered for expansion in the future.