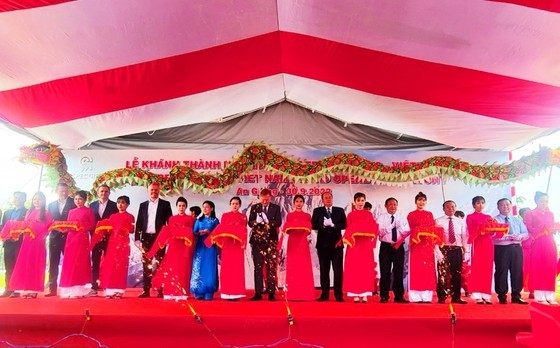 At the inauguration ceremony
Speaking at the ceremony, Danish Ambassador to Vietnam Nicolai Prytz said that Denmark has had 130 companies in Vietnam so far, and the garment factory is a typical example of the development of commercial cooperation between Vietnam and Denmark, especially in the context of the 50th anniversary of the establishment of Vietnam-Denmark diplomatic ties.
After the factory is put into operation, it will create jobs for 1,200 employees, contributing to improving the income of local people and the province's socio-economic development in the upcoming years.

According to Chairman of the People’s Committee of An Giang Province Nguyen Thanh Binh, many investors and businesses have chosen the Mekong Delta province in general and industrial parks and economic zones of the province in particular to implement their production and business projects in the passing years that contributes to the socio-economic development of the locality.

Up to now, An Giang Province has issued 46 investment registration certificates to enterprises with a total registered investment capital of more than VND8.2 trillion (US$344 million). Of these, 34 projects have officially come into operation and created jobs for 20,000 workers.