In the first days of the Year of the Ox, farmers in Binh Thuan Province were surprised when the price of this fruit highly increased, ranging from VND17,000 to VND20,000 per kilogram. This is a record high price in the past several months.

Before the Lunar New Year, farmers used artificial lighting to boost dragon fruit plants to give fruits out of season to serve the Tet market.

However, things did not go well as they expected. The price of dragon fruits on the Lunar New Year was merely at VND7,000-VND8,000 per kilogram or about VND10,000 per kilogram at its peak. Therefore, farmers lost income, and many households suffered heavy losses.

"Growing out-of-season dragon fruit is costly. If the price reaches about VND10,000 per kilogram, farmers can only recoup their investment cost. If the price is below this level, they will lose money. Dragon fruit farmers often rely on the crop for the Tet holiday, so most farmers urge dragon fruit plants to give fruits, leading to a plentiful supply. As a result, the price will decrease," Mr. Tran Manh Khoe, a resident in Ham Chinh Commune in Ham Thuan Bac District in Binh Thuan Province, shared. 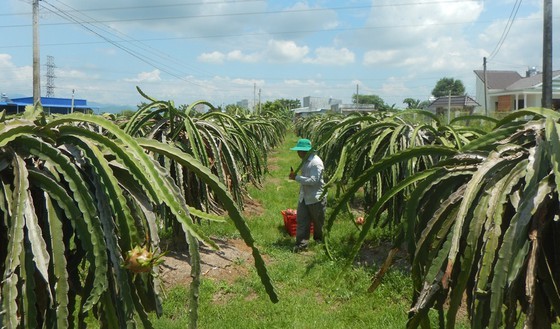 Due to the low prices of dragon fruits, many households did not continue to use artificial lighting on dragon fruit plants to make fruits after the Tet holiday, leading to an inadequate supply of dragon fruits. (Photo: SGGP)

After an unsatisfactory dragon fruit crop for the Tet market, in the first days of the new year, the price of this kind of fruit suddenly climbed, 2-3 times higher than that before the Lunar New Year. Despite the high price increase, dragon fruit growers in Binh Thuan Province feel concerned because they do not know how the price will fluctuate in the coming days.

Explaining the reason for the sudden increase in the price of dragon fruits, Mr. Vo Huy Hoang, Chairman of the Dragon Fruit Association of Binh Thuan Province, informed that in the first days of the new year, local dragon fruit trading enterprises simultaneously resumed operation, which resulted in insufficient supply. Because of that, according to the market law, the sharp increase in dragon fruit price is obvious. However, this price hike may be an "unreal increase", and there will be fluctuations shortly.

Meanwhile, Mr. Pham Cong Ba, Deputy Head in charge of technology transfer, information, and training at Binh Thuan Agricultural Extension Center, said that due to the low prices of dragon fruits, many households did not continue to use artificial lighting on dragon fruit plants to make fruits after the Tet holiday, leading to an inadequate supply of dragon fruits. Along with that, many enterprises increased the purchase of dragon fruits to have enough goods for export, so they raised the price to collect goods in time for export in the first days of the new year. 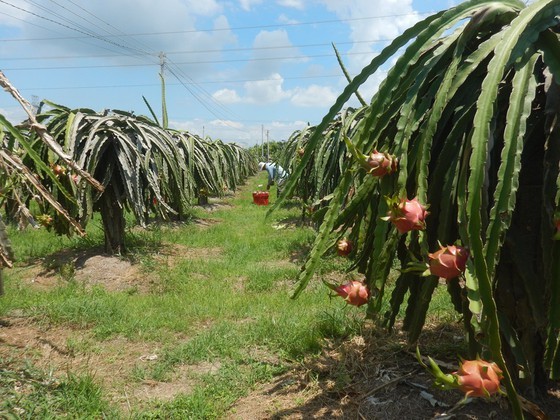 Binh Thuan Province is the locality with the largest dragon fruit growing-area and output in the country. (Photo: SGGP)
According to the Center for Agricultural Extension and the Dragon Fruit Association of Binh Thuan Province, in the coming days, when the batch of dragon fruits serving the market on the full moon of the first month in the lunar calendar is ready for harvest, the price of this fruit will slow down or decline.

Currently, Binh Thuan is the locality with the largest dragon fruit growing-area and output in the country. Up to now, about 80-90 percent of dragon fruit production in Binh Thuan is mainly exported to the Chinese market through unofficial cross-border trade.