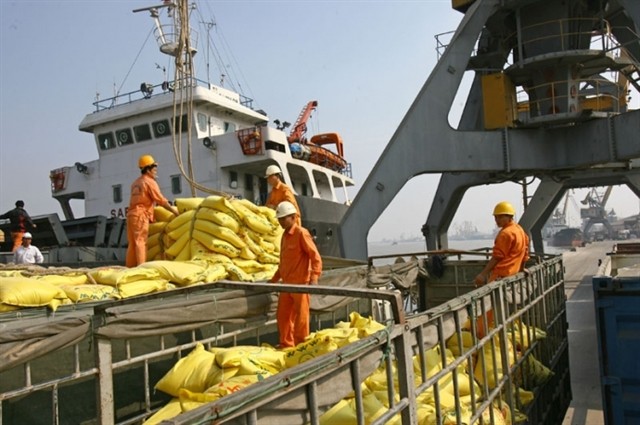 The implementation of social distancing to prevent and control the spread of Covid-19 has caused a large reduction in the workforce of seaport enterprises. (Source: baochinhphu.vn)


The implementation of social distancing in accordance with Directive 16 of the Government to prevent and control the spread of Covid-19 has caused a large reduction in the workforce of enterprises, including those in seaports.
The move was made after the Government Office sent an official dispatch to the MoT, requiring it to consider a number of urgent solutions to support businesses and limit disruptions in the production and supply chains in the context of the pandemic that were proposed by the Private Economic Development Research Board.
According to the dispatch, the board suggested the Prime Minister direct or assign relevant ministries and localities to review and apply uniform regulations on travel for groups of personnel who work at ports and responsible for export and import procedures. The people should be allowed to travel as shippers, it proposed.
The MoT said it agreed with the board’s proposals and suggested the People's Committees of provinces and cities consider and direct the implementation.
Earlier, transport departments in cities and provinces reported to the MoT that the application of social distancing had greatly affected the workforce of enterprises and seaports.
For example, Cat Lai Port in Ho Chi Minh City faced a severe shortage of employees such as port officers and forklift drivers as many workers were located in locked down residential areas and the city was applying regulations restricting travel between pandemic-affected localities.
According to the port, the number of employees has decreased by 50 percent to 250. Meanwhile, the necessary personnel required to be at the port to maintain operations is 500 people per day, excluding staff of customs, shipping lines and relevant State management agencies.
The stay-at-work model applied to loading and unloading workers at the port has not been very effective because the port has little vacant space, and many activities take place outdoors.
To deal with the shortage, the Vietnam Maritime Administration, the Seaport Associations and port enterprises have submitted proposals to the authorities to allow the Cat Lai Port’s workers to go to the port if they do not reside in locked down areas.