A record number of vehicles was congested at border gates in Lang Son Province a week ago. (Photo: SGGP)
At the forum to connect and support export agricultural products stuck at the border gates to return for domestic consumption, organized by the Working Group 970 of the Ministry of Agriculture and Rural Development (MARD) on the morning of December 31, Ms. Nguyen Thi Thu, Deputy Director of the Department of Agriculture and Rural Development of Lang Son Province, reported that the number of trucks carrying fruit and agricultural products stagnant at local border gates had decreased significantly compared to a few days earlier.

According to Ms. Thu, by December 30, there were only 2,971 vehicles trucks left at the border gates, such as Huu Nghi, Tan Thanh, Chi Ma, and Dong Dang, including 1,976 refrigerated trucks carrying fruits, down 559 vehicles compared to December 29.

Compared to December 26, when Deputy Prime Minister Le Van Thanh chaired an online meeting with localities to remove difficulties for agricultural exports with a total truck backlog of more than 5,000 vehicles, the figure has now decreased by more than 2,000.

According to Ms. Nguyen Thi Thu, it is mainly because the drivers and vehicle owners could not wait any longer and have turned their vehicles back to the domestic market for consumption.

Customs clearance to enter the Chinese market remains extremely sluggish and grueling. On December 30, the total number of vehicles cleared at the border gates in Lang Son Province merely reached 81, with 56 passed through Huu Nghi Border Gate and 25 through Chi Ma Border Gate. Meanwhile, the Tan Thanh Border Gate has been temporarily closed for over a week. "Among the vehicles that passed customs clearance, the majority are trucks carrying raw agricultural products. The number of fruit trucks is small," Ms. Thu said.

Therefore, from now to the Lunar New Year, the export of dragon fruits will be extremely difficult. Grasping this information, trucks have stopped bringing dragon fruits to the border gates.

On the morning of December 31, the Office of the Ministry of Agriculture and Rural Development informed that the ministry had issued Official Letter No.9056 to the Economic Committee of the National Assembly to report the congestion of agricultural products at the Northern border gates. 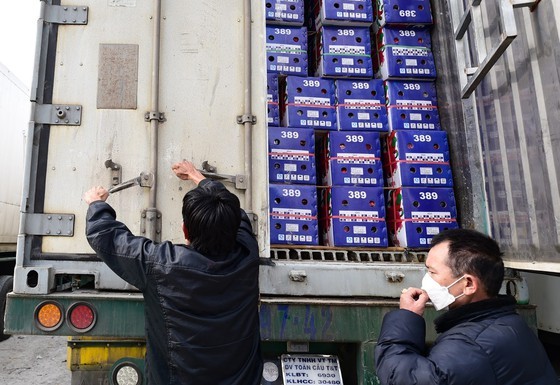 Container trucks carrying agricultural products congest at Huu Nghi and Tan Thanh border gates in Lang Son Province. (Photo: SGGP)
Previously, import and export activities between Vietnam and China took place vibrantly. The total import-export turnover of agriculture, forestry, and fishery products between Vietnam and China in the first 11 months of 2021 exceeded US$11.3 billion, up 19.5 percent over the same period last year. In which, exports reached $8.47 billion, up 14.5 percent, and imports $2.85 billion, up 37.4 percent.

Two commodities with a year-on-year decrease in export turnover were seafood with $862.8 million, down 21.6 percent, and rattan, bamboo, sedge, and carpet products with $7.8 million, down 23.1 percent.

To solve the current difficulties, the MARD proposed to the Government and the Prime Minister to have specific preferential policies, prioritizing the State budget for Covid-19 prevention in the border provinces, supporting them to invest in border gate infrastructure, warehouses, transshipment centers, logistics, and agricultural product preservation at border gates.

The official letter proposed the Government instruct localities to urgently review, survey, and establish a buffer zone for goods exchanged with China to closely manage and control the Covid-19 pandemic situation in the buffer zone so as to detect early and isolate people and goods infected with Covid-19 right from the buffer zone, instead of at the border, which leads to the immediate border closure.