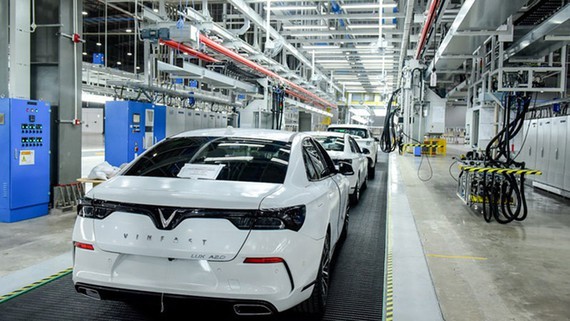 According to Decree No. 103/2021/ND-CP dated November 26, 2021, Vietnam continues slashing registration fees on domestically produced and assembled cars, towed vehicles, trailers, or semi-trailers by 50 percent from December 1, 2021.
According to the Tax Department of Ho Chi Minh City, after applying the preferential fee, the number of registered cars increased 3-7 times.
Specifically, on the first day on December 1, around 1,344 cars including 1,048 cars and trucks registered while on the second day, 726 registered vehicles including 605 cars and trucks and whereas on the previous day, the number of registrations was just over 180 vehicles a day.
According to many automakers, because imported cars are not eligible for registration tax reduction, many customers have turned to locally assembled and manufactured car models. For example, with a 50 percent discount on the registration fee, a buyer for a two-wheeler Mazda CX-5 pricing at VND1,185 billion (US$51,931) will save nearly VND60 million.
Not only that, with a 10 percent registration fee equivalent to VND 500 million, a buyer of domestically assembled luxury cars like Mercedes with a listed price of about VND5 billion, can save VND250 million.
In order to promptly serve vehicle buyers, the Tax Department of Ho Chi Minh City has sent documents to tax departments in districts and Thu Duc City requiring to facilitate businesses and taxpayers in the context of the Covid-19 epidemic.
Currently, about 40 models of cars manufactured and assembled on the market are eligible to enjoy a preferential policy of 50 percent reduction in registration fees.