Of which, provinces in the Mekong Delta grew more than 1.53 million hectares of rice, down 30,000 hectares, with an estimated rice production of 8.7 million tons of paddy, up 31,000 tons.

On May 29, the Ministry of Agriculture and Rural Development cooperated with the People’s Committee of Dong Thap Province to hold a conference to evaluate the results of the production of this summer-autumn rice crop and deploy the plan for the autumn-winter and winter rice crops in Southern provinces.

As for the model of large-scale rice fields in the Mekong Delta, the rice-growing area is still maintained at around 140,000-150,000 hectares for each crop. On average, each hectare of rice participating in the large-scale rice field model sees a decrease of 10-15 percent in the production cost, an increase of 20-25 percent in rice production, and an additional profit from VND2.2 million to VND7.5 million per hectare.

According to the Department of Crop Production, there are two production plans for the Mekong Delta provinces in the upcoming autumn-winter rice crop.

In the first plan, provinces in the Mekong Delta will grow 750,000 hectares of rice, up 25,800 hectares over the same period last year. The rice production is expected to reach 4.1 million tons of paddy, up 215,000 tons. In the past five years, the farming area of autumn-winter rice in the Mekong Delta fluctuated from 730,000 to 770,000 hectares. The rice-growing area in 2016 was highest with 825,000 hectares. Therefore, the first plan is said to be the most feasible.

As for the second plan, Mekong Delta provinces will grow 800,000 hectares of rice, up 75,800 hectares over the same period last year with an estimated rice production of 4.4 million tons of paddy, up 492,000 tons. However, the autumn-winter rice crop usually gives low profits in comparison with other rice crops and the risk is high due to rains and floods.

However, it is forecasted that floods are low this year, at the same time, the prices of commercial paddy of the winter-spring and summer-autumn rice crops are fairly high so profits also increase and the prices of paddy are forecasted to remain stable.

Based on that, many people said that the second plan can be applied to increase the production of autumn-winter rice crop to capture the opportunity to increase profits and partly make up for a decrease in the rice production of the winter-spring rice crop due to the impacts of saltwater intrusion and drought. 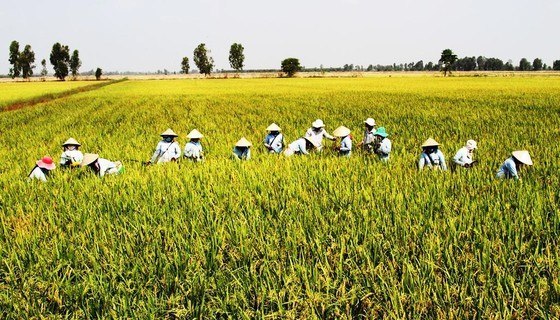 The MARD will closely coordinate with provinces to organize reasonable production to achieve good results in the rice crops in 2020. (Photo: SGGP)
The Southern Hydro-Meteorological Station noted that from the second half of May, the flow in the upstream of the Mekong River to the Mekong Delta is 5-20 percent higher than the average of many years, the water level in the upstream of the Cuu Long River is higher than the average of many years from 0.1-0.3 meters. Saltwater intrusion continues to decrease gradually. In the flood season this year, there is little likelihood of early flooding in the riverhead of the Cuu Long River; flood peak is likely only at alarm level 1 or 2, lower than the flood peak of the average of many years from 0.2 to 0.4 meters; flood peak is forecasted to appear around the end of September this year.

Currently, provinces in the Mekong Delta have 4,130 flood control cells with an area of 1 million hectares, of which, the number of safe flood control cells is 3,656 with an area of 903,000 hectares. The production of the autumn-winter rice crop is mainly inside the flood control dike, so it will be safe. However, the cultivation of the autumn-winter rice crop must depend on the harvest progress of the summer-autumn rice crop, as well as, must prepare for the next winter-spring rice crop reasonably.

At the conference, Deputy Minister Le Quoc Doanh of the MARD emphasized that this year the drought was extremely severe but the Mekong Delta provinces have overcome and achieved good results in the winter-spring rice crop which is commendable; now, provinces should continue to extend the winning momentum for the summer-autumn rice crop to be successful. The MARD will closely coordinate with provinces to organize reasonable production, so that this year’s rice crops will achieve the best results, both contributing to ensuring food security and increasing exports.