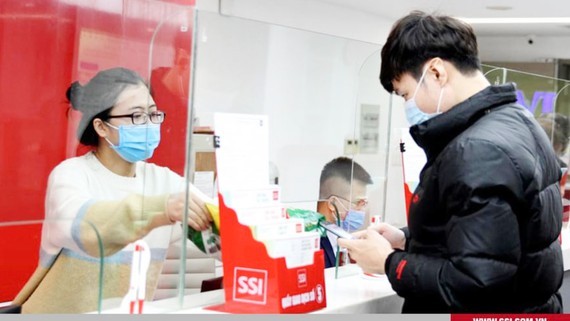 Contrary to the general rule of the stock market "Sell in May and go away", Vietnam's stock market set many records last month. Vietnam's benchmark VN-Index closed the last trading session of May at 1,328.05 points, an increase of 7.15 percent compared to April. All 20 trading sessions in May had a total trading value of over VND20 trillion. The total average trading value in the whole market hit a record level of more than VND24.14 trillion per session.

The last trading session of May set a record for the trading value in the whole market with nearly VND31 trillion, of which the HoSE accounted for roughly VND24 trillion.

In the first trading sessions of June this year, the VN-Index continued to set new peaks, and the market liquidity on Vietnam’s stock market also hit new highs. At the climax, in the trading session on June 1, due to a large amount of money pouring into the market, for the first time in history, the HoSE had to suspend trading in the afternoon session. Because only in the morning session, the trading value exceeded VND21.7 trillion, an all-time high, leading to a state of emergency of system safety.

Banking stocks were the driving force that helped the VN-Index continuously set new highs recently. Statistics show that out of 26 banking stocks traded on the stock market in May this year, only VCB shares of Vietcombank dropped by 1.4%. The remaining 25 banking stocks all saw a price increase of over 18%. The reason why this group of stocks increased strongly is considered to be the high growth rate of the banking industry. In 2021, banks will raise capital, pay dividends, and sell stocks to foreign investors, which has helped stocks of the banking industry soar. With the strong increase of the group of "king stocks", in the top 30 stocks by market capitalization on Vietnam’s stock market, the top four positions in terms of price increase belonged to banking stocks.

The Covid-19 pandemic caused production to be delayed, and bank interest rates were low, so the low-cost money flow has sought more attractive investment channels, including securities. That is also one of the main reasons why newly-opened securities accounts, especially personal accounts, set records.

Within the first three trading sessions of June, the VN-Index has risen by more than 30 points, surpassing 1,360 points after ending the morning session of June 3. Experts said that, in the context of social distancing, people stay at home more and increase investment, including securities.

A longtime stockbroker at Viet Capital Securities Company said that small investors who are new to the market often invest following the crowd. They search for information on the sidelines rather than relying on the information related to the P/E ratio or reading the financial statements of enterprises for analysis. Many investors even join online forums and chat groups to see other investors discuss then buy stocks following the suggestion of these investors. They even use leverages, such as margin loans, to buy stocks. Therefore, instead of losing one, they will lose double or triple, and the investment capital is "evaporated" quickly.

Many F0 investors won mainly by luck because many small investors invested in stocks as they were gambling, without really having any knowledge about this market, said this expert.